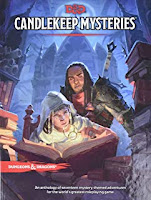 Yesterday, Beth ran a short but intense D&D adventure from "Candlekeep Mysteries", a D&D v.5 supplement. Nia, Wren, and I were the players. It was short and quite enjoyable.

Wren played an Aasimar magic-user. (I can't remember which flavour exactly.) That's a mortal humanoid of Celestial stock... somehow. A powerful character. Nia played a Elven Ranger. I always felt that rangers were a class better suited to the outdoors and even the wilderness, but this character worked. I played a human cleric, an old fall-back for me since my first experience of D&D (in 1978) consisted of a human cleric. The character was fairly basic.

What my character DID do was attract mimics. The last time I played a mimic in rug form rolled itself around me and almost smothered me. In this adventure, a mimic masquerading as a dining room chair grabbed me, but I wrestled my way out of it. So there.

We did not complete the adventure since Nia had to work an evening shift. In any event we're ready for the next installment!

I think you'll be seeing all these character again.