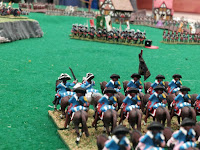 After my last post on the hybrid Seven Years War rules we experimented with at the Hamilton Road Games Group, a few of the readers of this blog asked for information on the the rules we used. I can only say so much since we crashed and bashed two sets of SYW rules together and I don't want to violate any copyrights or anything like that.


{Please remember much of this is my opinion and may have no or little basis in your reality.}

So... first off, it'd be important to have access to a copy of Warfare in the Age of Reason  which I believe is still available commercially as well as a copy of Warlord Games Black Powder, which I know is still available and is probably in a second edition. Both sets of rules are fine as they are, and even having said that, our group found some glitches in the rules. AoR covers so many situations in great detail and at times, does so with more complexity than might be necessary or desirable. BP is much simpler and at time too simple. The command system is often very unsatisfactory. It owes a lot to Games Workshop's Warmaster and the chaotic, magical, mystical nature of the command rules works well there. It's clunky for armies that are more regular and trained... and don't depend on magic or ogres or other such critters.
We used Age of Reason for movement & movement distances, weapon's ranges, unit moral classes (more on that later), formation changes, and command & morale. AoR sets up 4 morale classes:


Unit morale class reflects training and enthusiasm and determine how quickly certain maneuvers are accomplished. It is also taken into account when attempting to charge an enemy. Special training is reflected in BP by special rules. It's simpler to adjust the morale class of a unit and increase/reduce the unit's melee value. For example, Prussian hussars might be Class 2 "regulars" while Austrian hussars would be Class 3 "Elites." Melee values, taken wholesale from BP, might be best left alone, because morale classes also influence melees. ("Why reinvent the wheel?" I say.)
Weapons ranges are pretty tight in AoR, but that works just fine. As to artillery, we used only the medium artillery pieces. Others are possible, including siege guns, howitzers, and mortars, but remember to be flexible in this. Oh, yes, once a battery is unlimbered, it can only be moved by "prolonge" since the civilian contractor paid to move the guns has gone home to save his horse-flesh. Horse artillery, like that in the Prussian and Russian armies, or militarized transport like that in the Swedish army, can allow the guns to re-limber. 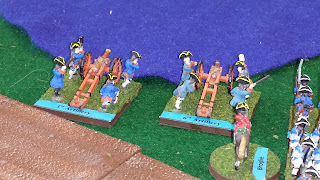 When determining combat, both ranged and hand-to-hand, we used the system from Black Powder. It's simpler, quite direct, and works fine. It takes into account large unit sized and morale classes by predetermining shooting and melee values. The system for melee can result in "hold your ground" for a continuing melee, a fall-back by the loser of the melee, or the complete destruction of the unit based on casualties and morale.
Once units begin to take casualties and might be "shaken", the player has to determine if his brigade or brigades are "broken." Eliminated units are counted up, permanently "shaken" regiments still on the table (actually these troops are routed) counting as 1/2 point, and if the number of units counted as casualties equals 25% of the original total, the top general has to roll on the AoR "Army withdrawal"table, using all the printed variables. The higher the percentage of losses, the tougher it is to stay in the battle. In our experimental game, this was problematic and a sticking point. Some players felt that some units were counted twice in a form of "double jeopardy." Andy and I discussed this and finally came to agree. So the ideas found above are a result of later consideration. This may still be a troublesome area, although I'm satisfied with it. Maybe more work needs to be done to get this right. 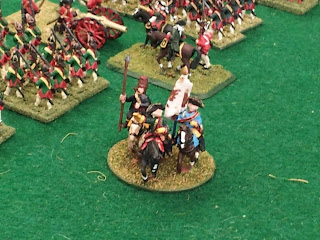 Brigadier generals moving with their brigades can "heal" casualties in the regiments, reducing the accumulated number of casualties. (The final casualty cannot be removed.) BP requires that the general be attached to the regiment, but we said this could be done as long as the regiment in question was within the general's command radius (which is equal to his command value. For example, Frederick the Great has a value of  10 in BP, while certain Russian "Idiot generals" have a value of 6.) To heal, the player rolls less than or equal to the general's value on 2d6.  He can do this to one regiment of his brigade in a turn

Making up written brigade rosters is highly recommended. The general's name and command value is shown as well as each regiment's name, # of stands, morale class, shooting value, hand-to-hand value, "Stamina" (BP's morale value for use in knowing how many casualties a unit can take before it's shaken), and special notes - first fire, skirmisher, armoured cavalry, lancer, etc.
Now this is a "house rule" we use and I like it! Each brigade is assigned a playing card, red for one side, black for the other. Another set of identical cards is shuffled each turn and turned over one at a time. When your card comes up, your brigade moves. If the next card is one that cannot affect or be affected by your move, the other player in question may move. So if my card is turned up, and I move my cavalry brigade on my side's right flank and the next card activates a brigade on my opponent's right flank, that brigade may move as well because chances are there will be no interchange between them. However, if the next card activate the same army's brigade on my immediate left, he has to wait until I move. We could end up blocking each other's move, masking artillery batteries, and generally gumming up the works. This reflects the "fog of war" by the use of a quite simple mechanism. 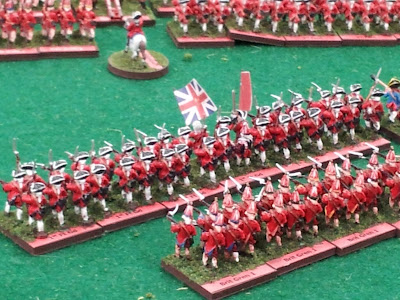 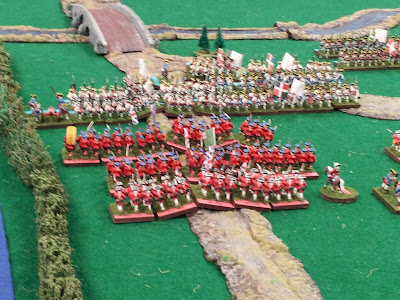 I think this about covers it, but I'm betting there are still questions. With that in mind, I'm going to ask that longer questions be sent to me by e-mail (Grenzer7@aol.com) rather than the remarks left at the end of the blog. People deserve answers if they have questions. Let me know if you use these hybrid rules and if they are satisfactory. I'd like to know.

"It's Alive!" aka "The Frankengame" 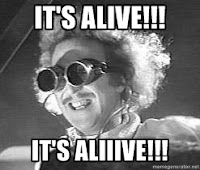 It may not be what you think. Or maybe it will be.

Between Andy and I, one of our favourite wargaming periods is the Seven Years War. He's been building Prussian, French, and British armies for many years and he's working on Austrians. I've got a substantial number of Russians and Austrians with my wife's Bavarians and my Reichsarmee brigade for colour. Andy has long preferred the Warfare in the Age of Reason ruleset. I cut my teeth on Koenigkrieg, but I've moved away from that. We've been using Black Powder for the period lately, but found that unsatisfying. Andy developed a hybrid set of rules using the command, movement, and ranges from Age of Reason and the shooting/fighting system from Black Powder. On Saturday, we set down to make the experiment.

Andy, Ian, and Kevin ran the Prussians. Tyler, Martin, and I captained the French. There were three roads crossing the table and the objective was control two of the three to permit your army to push on past the enemy using those roads. Ian took the Prussian right, Andy the left, and Kevin the centre. Martin was on the French left, Tyler took the centre, and I had the right with a cavalry brigade, a German brigade, and the Irish brigade.


The Prussians were a bit more aggressive in their advance although I almost immediately threw my French regiments of Horse (heavy cavalry) against the Prussian hussars. I had to see what would happen... and I paid dearly for it. Two of my three regiments of horse evaporated and the third was thrown back. The hussars were hurt but not destroyed. My infantry squeezed between a forest and moved up on both sides of a pond with the artillery of both brigades taking station on the shore of the pond. They couldn't be attacked but they were at long range for the entire game. Tyler pushed forward into the town and Martin threatened Ian with his left flank cavalry.

With my cavalry brigade "broken" and the French-employed Germans reeling from Prussian musketry and a cavalry charge, we soon realized that we were not going to stay around long. (I had made the horrible mistake of putting one of the regiments in column to move to their right. Andy hit them with a hussar regiment while the infantry was in column and tore them apart.) Using the Army Withdrawal table from Age of Reason and with one of Tyler's brigades in bad shape as well, the French were permitted to withdraw as the gentlemanly customs of the time required.


The hybrid rules worked reasonably well; we came to a real decision that made sense. There were some kinks, especially in the way the withdrawal table could be used. Some rethinking and some "ironing-out" will be necessary. However the experiment worked. We didn't use any guard troops or low-quality militia or freikorps units. Everything was quite regular with a few elites, usually brigaded together as the time's convention demanded. I'm looking forward to playing this set-up again.

Later that evening, my wife, my daughter, and I attended a hockey game which benefited the Canadian Mental Health Association. The "Maple Leaf Alumni" played the team of the St. Thomas Police Association which included some plays by the local "Timbits" youth hockey teams, playing against the Maple Leaf Alumns. I'd seen two exhibition games at the old Maple Leaf Gardens when I lived in Toronto back in the 1980's, but this was the first I'd seen live in 30+ years and the first my wife had seen. It was fun and it was for a good cause.