Around our house, my wife always says that the first time you visit, you get served by one of us. The second time, we'll tell you where to find it. On the third visit, you'll probably know where it is, so you can go get it. This applies to snacks mostly. For more regular sit-down dinners, it's often buffet or family-style.

So now... what do I make of this fellow? He showed up last week on our fence, his third time in our backyard. The first time, he looked around. The second, he brought his own food (something he picked up in the neighborhood, as it were.) This third time, I suppose he'll find his own way.

I'm somewhat surprised to see such a bird in our neighborhood, but more and more, I'm discovering that the local animals have lost most of their fear of us humans. I do enjoy seeing him when he comes by. I'll be watching for his next visit.

Posted by Grenzer John at 12:10 No comments:

Email ThisBlogThis!Share to TwitterShare to FacebookShare to Pinterest
Labels: Hawks at home

New life lesson: Always check your e-mail before you go out the door. Rob and I were prepared for a small "tread-head" game of "Patton's Dream" (ETO 1946 - Western Allies and Wehrmacht vs. the Red Army -- all heavy tanks and stuff.) Checking e-mail, I discovered Andy was under the weather (he brings the terrain) and because of that, Martin had no ride (he brings the "Panzer-Disney" equipment.) Quickly shifting gears, Rob and I grabbed terrain, figures, models, and dice. By the time we got to the Games Group, we had a viable scenario in place for Disposable Heroes World War II ETO. British Paras are defending a French town from an SS force that is trying to dislodge them. Some Maquis fighters are aiding the Brits and an American armoured infantry force is rumoured to be on the way for relief. Rob ran the Paras (a platoon with a 75mm pack howitzer) and the Maquisards. Tyler and Bear ran the SS (a reinforced platoon with a Pzkwgn IV G, a Hetzer tank destroyer, and a self-propelled quad 20mm) while DJ pushed his armoured infantry. (A Sherman 75, a Sherman 76, 3 M3 half-tracks with troops, and a jeep.)

Since Bear and Tyler knew that DJ's relief column was coming (although they didn't know when), they split their forces, some lying in ambush around the hedgerows for the US troops and others advancing on the town. Rob filled the buildings with riflemen, Bren gunners, and a Vickers HMG with the pack howitzer standing behind the town. The SS moved first, threatening some of the town and taking the Vickers HMG out early before it did serious damage. As it was, they took casualties from it before destroying it. At the end of the turn, DJ rolled to see if he'd enter and he rolled an immediate entry! His troops had to enter on the road, but could leave it as soon as they entered, so his jeep came tearing in and flashed around the hidden Germans. It didn't last long, but it got the SS's attention.

DJ brought in a halftrack a turn and followed them closely with the Shermans. The 76 engaged the Pz. IV and they exchanged shots to no effect for quite a while. The half-tracks unloaded their riders and two of the three M3s were dispatched by the SS with flamethrower and Panzerschreck. The Yanks took the SS on hand-to-hand and the Americans won although the fighting in the hedgerow was quite bloody. None of us had ever seen so much hand-to-hand fighting in a Disposable Heroes game before! Then again, our troops rarely get so close to each other in a game. As the game went on, the US troops close-assaulted the Hetzer. In DH, you first have to perform an "improvised close assault" on an AFV and all you can do is stop it and inflict one penetrating hit. Once it's immobilised, you close assault again and you can kill the vehicle. An immobilised AFV is dead meat for infantry. DJ hit the Hetzer with a dismounted squad, immobilised it, and killed it. However... he didn't get his boys off the tank destroyer quick enough and it exploded under him! This cost him one figure and pinned the rest, but the TD was out of action.

As it was, Tyler and Bear were still sending two groups against the town - an SS squad and a Recon section. They exchanged fire with the Red Devils holed up in the houses and did some damage... until the Marquisards came up! The rules state that the Resistance/Marquis/Partizans are to be armed with whatever the figures are armed with. Sooooo... there were lots of SMGs and the SS squads were on the receiving end of a lot of firing. They were cut up very badly.

At the end of the game (we had set a limit on the number of turns early on), the town was held by the Paras who had lost some but not too much. The US force was down to the Sherman 76 and about a dozen scattered troopers. The SS had been bloodied, had most of their vehicles, and had not taken the town, however they kept the relief force out of the town as well. The Sherman 76 could've made a difference but it was a case of too little-too late. Nonetheless, everyone involved said they enjoyed it.

At the same time at another table, Wayne and Kevin were engaged in an age of sail battle using Wayne's variant of Wooden Ships & Iron Men geared for the War of 1812 on the Great Lakes, Lord of the Lakes. I can't comment on it; I just took photos. Beth watched for a while and said it looked quite playable. 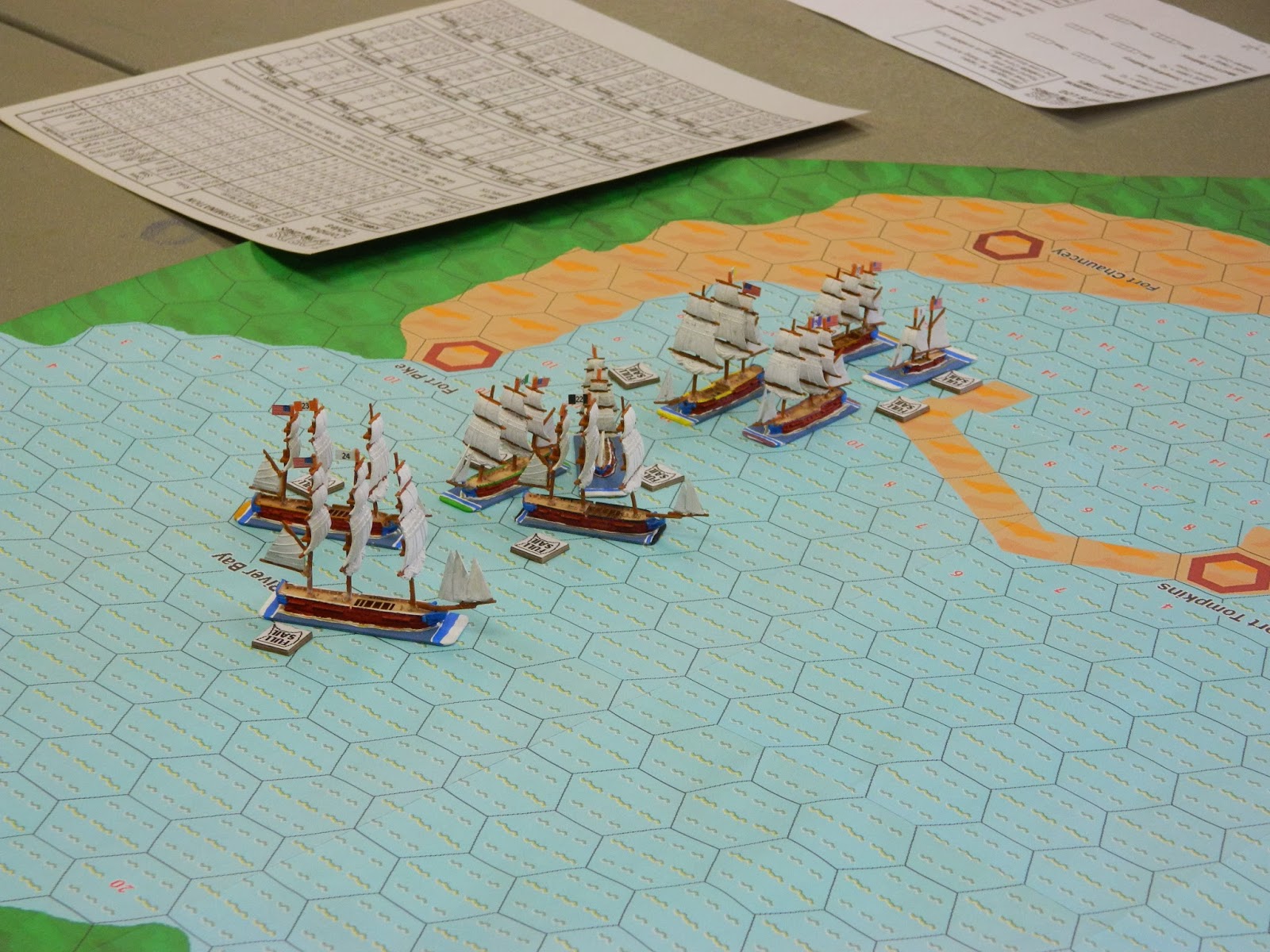 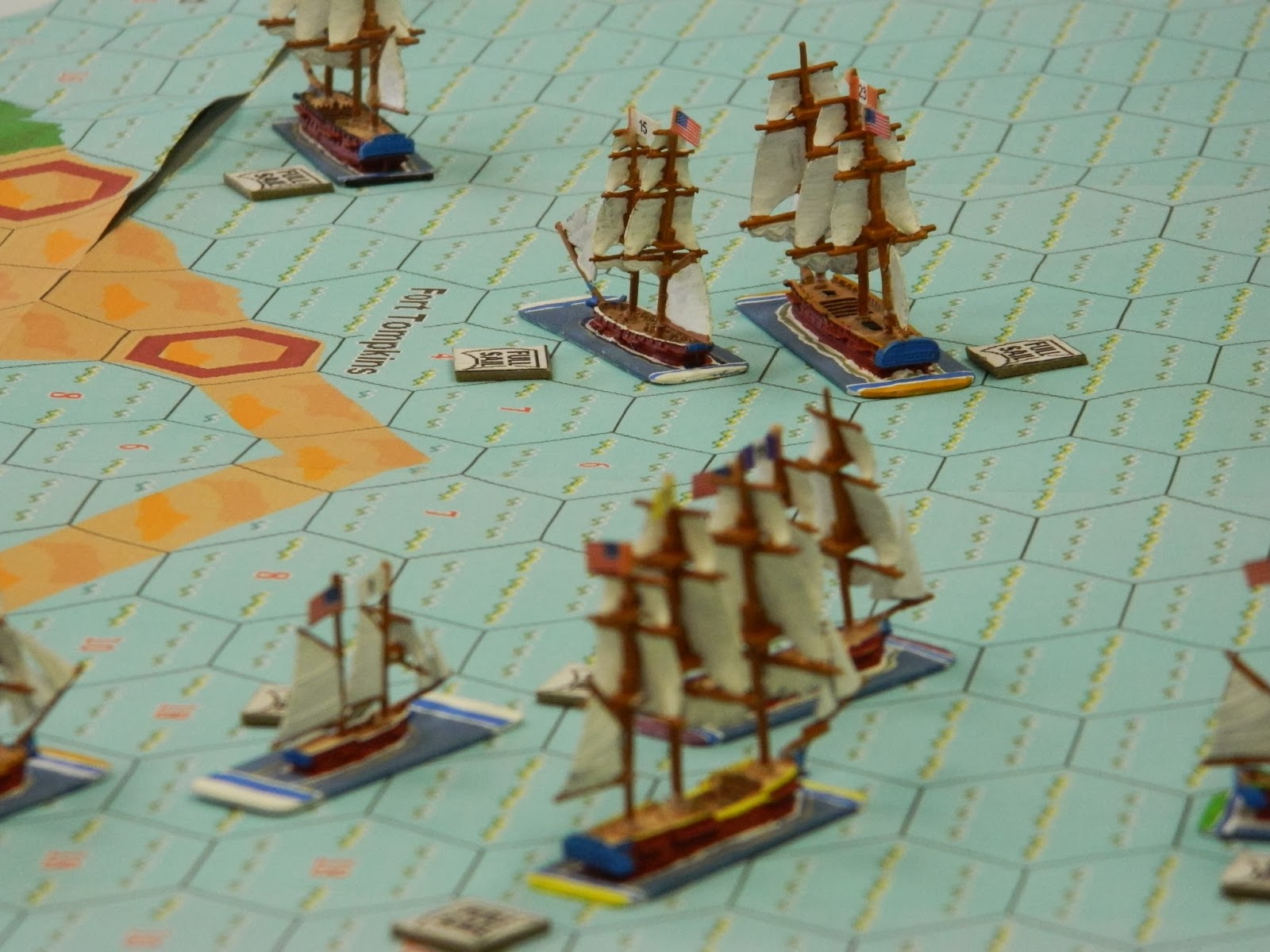 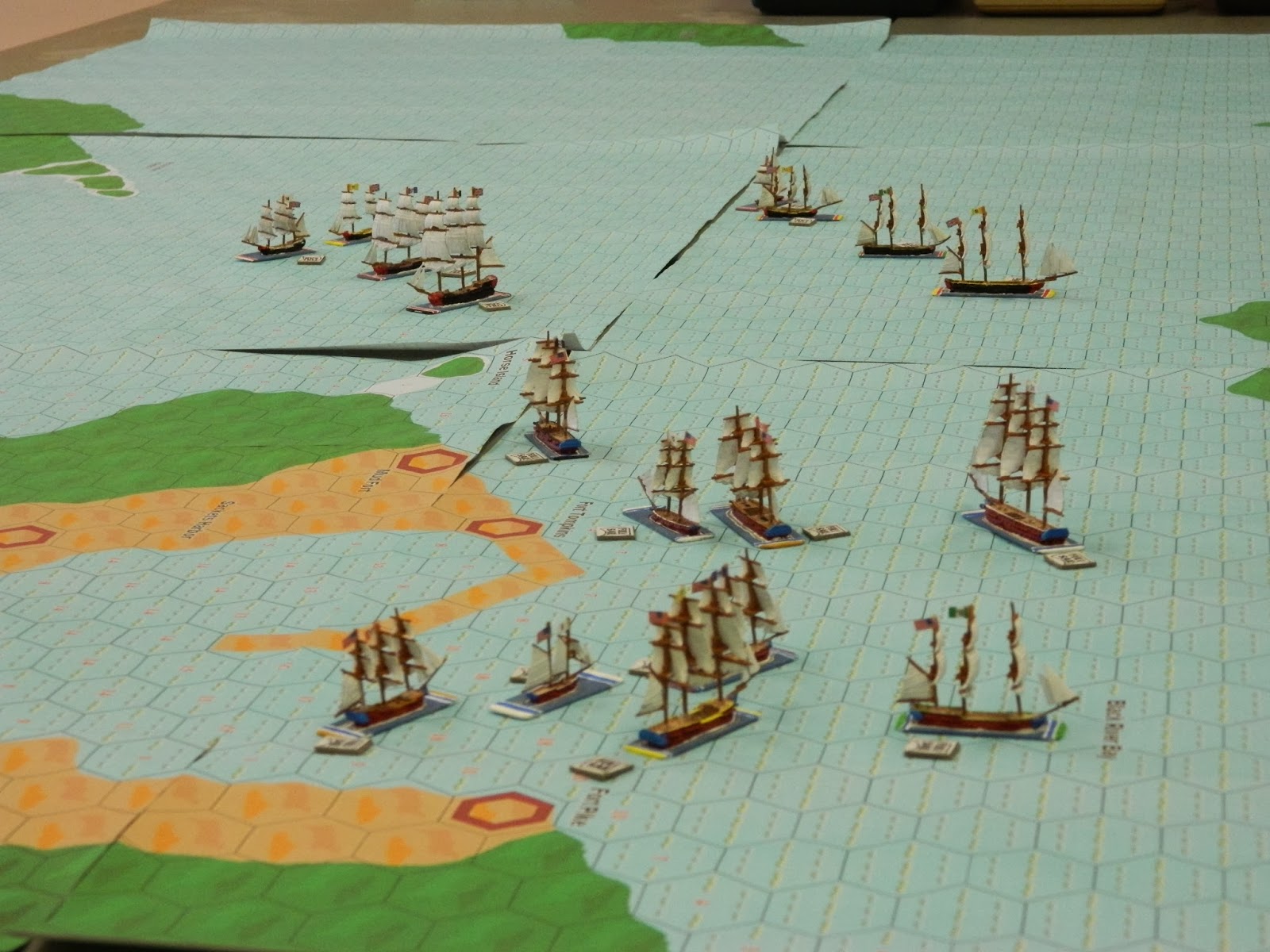 Posted by Grenzer John at 13:45 No comments:

Using our home-brewed ACW variant on Iron Ivan's This Very Ground, a fairly large game was played this past Saturday at the Hamilton Road Games Group. Andy, Kevin, Martin, and Rob took the role of the generals of the Federal armies, while Bear and I defended the honour of the Confederacy. The boys in grey were defending a fortified position from an assault by the Union with about twice as many troops and 2 extra cannon. It was tougher on both sides than you'd think.

The Union moved in, as they had to since they were the attackers. Since our artillery took a long time to load and our infantry took longer still, Bear and I held our fire or only fired half volleys on the advancing Yanks. Because of the fortifications, our troops could only be hit on a "1" on a d10; the usual required value is a "5." Many of the first rank units were pretty chewed up, but there were a number of ranks. The Yanks crossed the open plowed fields (represented by some sort of chenille cloth Andy got at a store) and still caused some casualties among our dug-in Rebs - lucky shots. The story is pretty straight forward: Blue-coats advance, Grey-coats fire, Blue-coats die and are replaced by the next rank of units. One of Martin's units (or was it Kevin's?) was reduced to two figures by the time it reached the fortifications and STILL it never broke. (Tough New Englanders, I imagine.) Bear and I had the best shooting when it came to hitting officers. According to our rules, when a unit takes casualties, a d10 is rolled. If the resulting number is equal to or less than the number of casualties taken, one of the casualties is the unit officer. (Two casualties? The officer is hit on a "1" or a "2".) Union officers and first sergeants were dropping like flies! Still the blue wave came on.

Eventually the Union tide broke on the redoubt and the infantry came over the wall at the cannon crews. All three guns were knocked out of action in two turns. An assault against infantry on Bear's side of the fortifications was thrown back. Rob was running a small section of Bredan's 1st US Sharpshooters with their special rifles and they had picked off more than a few of Bear's troops. I had one reserve company with I moved up to the wall in the hope of enfilading the advancing Federals, but to little or no avail. We called the game as a Union victory although a bloody one. They had breached the wall in three and possibly four places, making our position untenable. I know there will be more games with this set although we may have to look at the canister rules and the cannon range rules. I might help if I were more familiar with the variant rules we've done up. Still it was a fun game - admitted to by all present - and that is why we play, isn't it?