Fanshawe Pioneer Village is an "open air" museum on the north end of London, ON. As such, there are a number of buildings to represent the history of the area and a number of historical reenactment events are held there throughout the year. Last weekend was the "Invasion of Upper Canada" event representing the War of 1812. The ravages of that war did not touch the London area directly. Although there was a skirmish in what is now London and raiders from the US did pass through there, no real battles were fought in or around London. So the attack on Fanshawe and the fights reenacted at the weekend are fictional.

Fictional, but no less fun.  (All photos courtesy of my wife Beth, my daughter Katie, Paul Kelly, Steve Zronik and Linda Lee, and Wilma and John Stephens.)

Following a flag raising on Saturday morning - a warm and somewhat muggy day- a skirmish was held in the town, around the buildings. The US Forces were driven back this time. I was first sergeant for our unit, Croghan's Company, 17th US Infantry and since there were only a few of us - John, Tyler, Peter (a true scholar and expert on the War of 1812 who usually serves as an officer of the Crown forces, but turned out in white summer roundabout with the US today) and myself - we served as flankers and skirmishers on either side of the 22nd US and the Canadian Volunteers. Toward the end of the battle, I was "wounded" and sat down on the tavern porch, talking to Dave, the captain of the Royal Scots. That is, until Tom of the British Indian Department attacked me savagely with his plastic knife. He said he didn't want my liver, but my pancreas...

After the morning skirmish, the order of the day was lunch and meeting up with some later arriving members - Tina and Kevin, and Brandi, Livie, and Jared. We sat in the shade behind the tavern and listened to a grand folk instrument band, Tethera (http://tethera.webs.com/), who were quite entertaining.

The afternoon battle was on the field just east of the camps. The US forces went and hid in the woods as the British pickets stood at a fence. My section was ordered to support the two guns that we rolled out of the woods at the beginning of the battle. My section - Tyler, John, Peter, Jared, and I - would advance to fire two or three small volleys while the cannons were being loaded between shots then fall back 5 paces when the cannon were ready to fire. When the Native warriors and Caldwell's Rangers charged out of the the woods to capture a gun, we were to run away then return to the field and join the firing line.

Our outfit stayed on the field to assist one reenactor who almost dropped from the heat; he was in his wool uniform. We saw him off the field after soaking a neck-cloth with water and laying it on his neck. He soon had cold water poured on him and poured into him. He was fine the next day and was out in good health. I didn't drop from the heat, but I could only take so much, as this next photo shows. I had also cut my hand in the woods. It wasn't a bad cut, but it bled more than it was worth.

Beth, Katie, and I went home for dinner and a good night's sleep. It rained and thundered during the night and we were glad to be home. The next day, the camping reenactors said it wasn't bad. We slept in a bit and went up later in the morning. (Katie had the night shift to go to at her work.) The day was a bit cooler and there was a stiff breeze to make it better yet. Kevin, Tina, Tyler, Tina, and Jared could not make it back on Sunday, so John (loaned to us by the Royal Scots) and Peter and I were joined by a few other men of the 41st Foot who have US kit to serve as artillery guard for the afternoon's battle, starting at the rail fence. Beth put on her own "battle suit", picked up her rifle, and came out in her Lenni-Lenape (Delaware) female warrior persona for the day. She tried to kill me more than once.


The outcomes are scripted but the "getting-there" is often a mash-up. At the end of the battle, Beth came with Roy and Tom and stole my shako, wearing it as we all left the field. It was only four sizes too large for her. All this took place after a time of silent remembrance of all who died in the actual war. 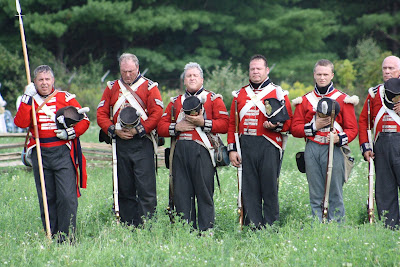 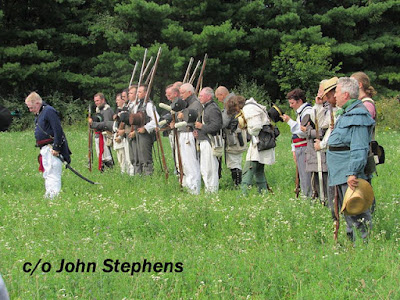 The final exercise of the day (which I didn't take part in) was the lowering of  the US flag and the raising of the Union Jack, showing that the Crown forces were once more in charge of the village.

And more random photos:
If you happen to go to a reenactment, don't hesitate to ask a reenactor questions about their impression. They'll have answers, and the smart ones will tell you that they don't know and direct you to someone who does. All of the reenactors - military or civilian, Crown, US, or First Nations - work hard on their impression and we're usually happy to field questions. To be honest, we'll probably tell you more than you wanted to know.

Summer is closing; one more reenactment scheduled. I hope it'll be cooler.