I'm taking a moment of pure self-indulgence and displaying some of the figures I've painted recently and some not so recently.

I'm "working under contract" for Bear of our gaming group. He doesn't have much room to paint and I'm glad to do what I can in this. He wanted some late WWII German SS troops in the cammo smock. I've done the autumn pattern for myself and I decide to do the "spring" pattern for Bear. They cannot be mistaken one for the other.


My wife has been working on a project for a while, but because of her involvement in a local theatre group and some long-lasting sickness, she's had trouble finishing it. She asked me to finish up the few figure she'd started, and I did. Lots of whimsy and fun. We don't know how they'll be used on the table but they will!

And... some other stuff.

All for now. I'm continuing to paint. As you can see, there's stuff up on the blocks waiting to be primed.
Posted by Grenzer John at 14:03 7 comments:

The Hamilton Road Games Group is attempting to develop a schedule for our 'historical' games. This past week, we exercised the schedule for "Fleet Actions" and played Naval Thunder using 1930's fleets for Imperial Japan and for France. The action was supposed to be taking place in the Gulf outside of Hanoi. The Japanese fleet was more modern than the French Pacific-Indochina fleet, which appears to be made up of out-dated battleships and cruisers with a batch of destroyers. The Japanese also floated larger guns and made the most of the "Long Lance" torpedoes.

Martin, Kevin, and Bear were the commanders of the French while Andy, Derek, and I captained the Japanese. My squadron consisted of the heavy cruiser Furutaka, and the destroyers Kagoro, Isukaze, Urakaze, and Akitsuki. (I'm glad I remembered to write those names down because I can't tell names or classes from ship silhouettes. Naval gaming is not my primary thing.) Oh, yes, photos are courtesy of Martin and of my wife's camera (manned by me.)

Both sides spend a few turns advancing toward each other since most of our guns were vastly out of range. The Japanese found the French in range first, but the dice failed us... consistantly... all through the game.

My intent was to do an end run on the left side and mess up the French fleet's day with torpedoes. The Japanese "Long Lance" torpedoes have a range of 150% of the French torps. They rate as a 24" torpedo with means if/when they hit, they do hull damage equal to their rate in inches, in this case 24 damage points to the hull. Some of the destroyers have a hull rating of 7 or 8; a torpedo hit could ruin your day. Andy intended to do something similar on the right flank with Derek holding the centre with his battleships - a force to be reckoned with! Kevin came at me with three cruisers, while Bear took the centre with three elderly battleships. Martin faced Andy with a destroyer-heavy force in an attempt to deny Andy's end run.

As I approached, my faster destroyers pealed off, leaving the heavy cruiser and the older destroyer, Akitsuki, to come straight in. I was still hoping to launch torpedoes. Alas, this was not to be.

Kevin and Bear slowly (well, not so slowly) picked off my ships - Isukaze (DD) in turn 6, Furutaka (CA) in turn 7 Kagoro, Urakaze, and Akitsuke (all DDs) in turn 8. I kibitzed for the rest of the game which was maybe a turn or two. Kevin turned his three cruisers back in order to come around and face Andy's ships. Bear's battleship squadron made a right turn and was steaming behind the smoke screen to attack Derek's battleships. Martin was holding is own, but only because Andy could not get his dice to cooperate! He kept rolling "ones" which is an auto-fail in the game. He was getting royally ticked off over this and considered throwing his dice through the drywall. If it hadn't been library space loaned to us, I'd have expected to have seen some d10-sized holes in the wall. I really can't blame him; such things are VERY frustrating!

The Japanese had to withdraw, but it was not a full-fledged victory for the French. Their destroyer force had been hurt and the one cruiser continued to pirouette. The French battleships were really no match for the same number of Japanese BBs. The French cruisers were more numerous but had less guns. I think the French stuff was slower as well.


Not that it mattered.


Another fun game despite the frustrations of the dice. A day of gaming is still superior to many things we could end up doing.

Next week we're going to try a space battle using the Sunder the Stars rules (available on line, I understand.)
"IN SPACE, NO ONE CAN HEAR YOU WHINE." 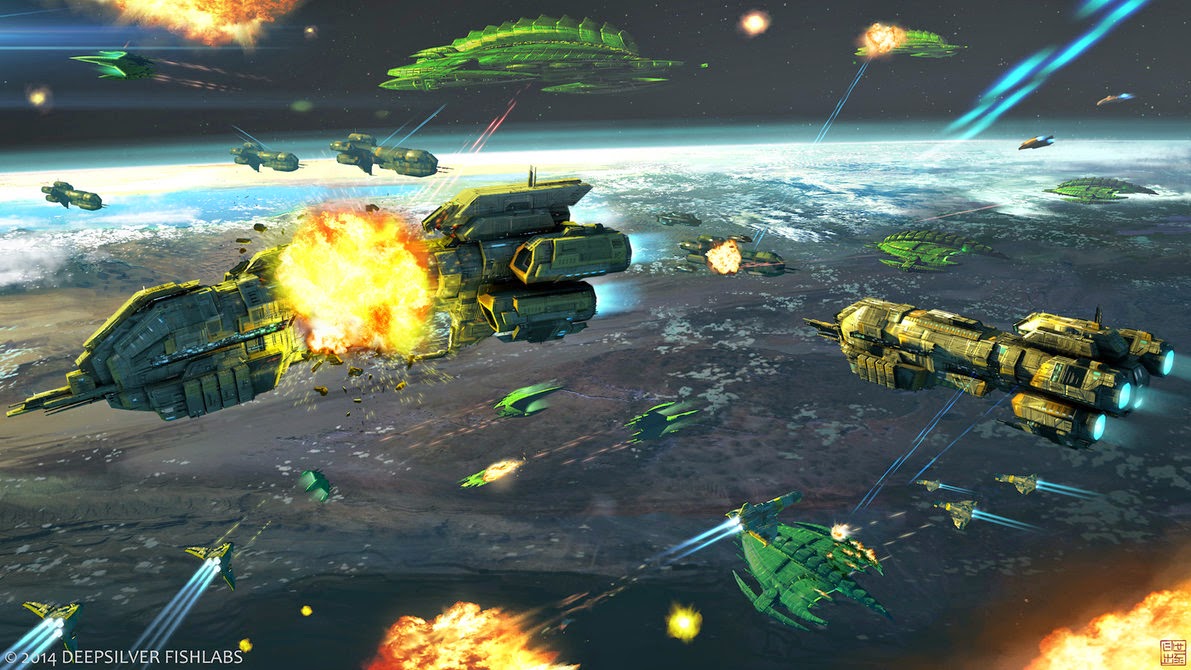