Last weekend, the Backus Page House Museum was the site of a merchant's faire of a sort. Many of these merchants or vendors were unable to sell much of anything because of the strictures put in place because of the COVID-19 pandemic. This was the first time for many of these folks to be out in a year and a half.

Both Saturday and Sunday were bright and HOT. A food truck from the Optimists Club was on site as well as a commercial ice cream trailer, both busy at times. If it looks like many of us are "dressed down"... we were. It as "shirt-sleeve order" for many of us.

So just a few photos: 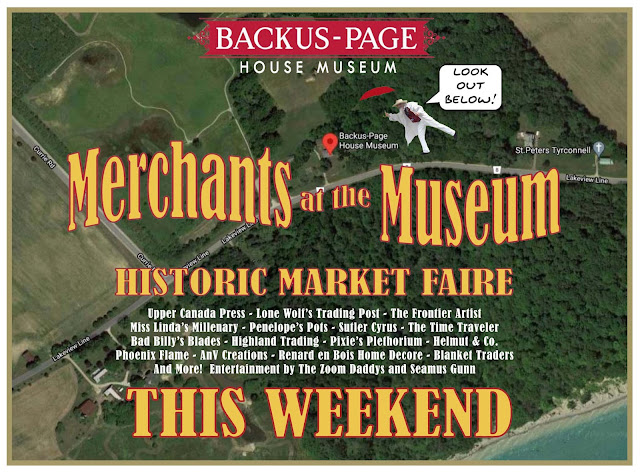 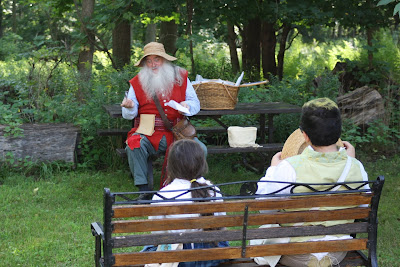 Backus Page House Museum will host a War of 1812 weekend on September 25-26 (unless the Province goes into lock-down again.) If you come, please wear a mask although the entire even will be out of doors. Better safe than sorry!
I also sincerely hope that it won't be as hot that weekend!
Posted by Grenzer John at 09:55 No comments:

Email ThisBlogThis!Share to TwitterShare to FacebookShare to Pinterest
Labels: Backus-Page House, merchants and vendors, War of 1812

In Ontario, the first Monday in August is a provincial holiday referred to as "Civic Holiday" although it's called by different names in different areas of the province. It's not a federally mandated holiday so a number of stores are open, some with reduced hours. I think it's an excuse to have one more three-day holiday in the summer and I do like it.

This past Monday was Civic Holiday in the London-St. Thomas area, and my friends, Andy and Barb invited Beth and I to come to their house in London to have a game on the back deck and a cookout. Another friend, Ralph, was invited as well. So off we went just before mid-day, bringing 7-Up, chips, and two kinds of dip to the party. Andy and Barb grilled sausages outside and also brought out the sauerkraut and potato salad with ice cream for dessert. We all thoroughly enjoyed the day.

The game was of the War of Spanish Succession using Warfare in the Age of Reason rules and the Age of Marlborough supplement to those rules. Ralph ran the French/Bavarian/Allied side and I took the role of the commander of the Russian troops. I had a redoubt and I stayed in it until Ralph assaulted it and broke in once one of my cannon was lost.

(All photographs courtesy of Andy, and my wife, Beth.)


My cannon caused some casualties to Ralph's troops during his advance, but artillery is not all that powerful when it's spread out all over the board in the manner appropriate to the period. Musket range is very close so we both held our fire. The rule of thumb is "If you measure, you've fired" and that's a good way to waste your extra die for "first fire."

Over dinner the discussion turned to science-fiction movies and TV shows, music, and such, as well as the taste of the sausages, sauerkraut, potato salad, and beer/cider. It was a great time with good friends, good food, and good conversation.
Maybe this is how I'd want summer to be.