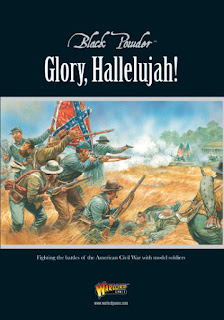 This past Saturday, the Hamilton Road Games Group saw a game of Warlord's Black Powder for the American Civil War, using the ACW addendum, Glory Hallelujah! I volunteered to set this all up, since I have both armies and the proper buildings in 15mm. The game is more impressive in 28mm, I'll give you that. However, playing in 15mm allows the players to see a wider scope in the game. It also is more compact. The final advantage is simple: I already have plenty of figures painted, based and ready to go! I also have some place/period buildings ready.

The South won the initiative roll and got the first move. (Our strategy was to refuse the left, leaving Derek to demonstrate with his troops and keep Bear occupied. He had a line of heavy woods in front of his cavalry brigade (one large regiment and a horse battery) and his Pennsylvania brigade, a reluctant force who had "seen the elephant", occupied the open space between the far end of the woods and the table edge. Rich held the centre and saw the bulk of the fighting in the game, Kevin was on the right flank and was to attempt a "right hook." My commanding general and the artillery reserve of 4 batteries - 2 of 12 pounder smooth bores and 2 3" rifles - were going to move to the hill at the centre of the Union line and pound anything that came into range. Since we used inches rather than centimeters, movement was pretty fast. We've discovered that ranges and movement in inches makes for a quicker game. The faster movement is balance by the longer ranges for firing.

The Greycoats advanced straight on, although Matt's garbage-y command rolls held him back a bit. He had a two regiment cavalry brigade (the large 6th Virginia and a combined unit of detachments and guerrillas) that took a while to get untracked. Kevin's Union brigades were slow to move as well. Rich advanced as Ralph's Texans advanced and they soon met with Texans fighting Zouaves. Rich's brigade had a battery attached (each brigade did) and it held off Wheat's Special Battalion ("the Louisiana Tigers") for two turns to everyone's amazement. The battery was finally destroyed but it cut the Tigers up so badly they had to fall back. Bear came straight on with his brigades and Derek met them with apathy... as he was told to do. His cavalry failed command roll after command roll, until they finally dismounted (a free move) and advanced into the woods as skirmishers.

Between my artillery reserve and Rich's Zouaves, Ralph's brigade broke and had to retire. Luckily Rich had a brigade of Regular Union army troops (which included the Garabaldi regiment from New York and the Pennsylvania Bucktails) there to shore up the line when his Zouaves took so much damage and had to retire as well. One of Ralph's Texan regiments charged one of Rich's but it passed in front of another of Rich's outfits which got "transiting fire" as the Texans went by. The unit they charged was armed with smoothbore muskets and so got an extra die for shooting in closing fire. This resulted in the breaking of the Texans. When Brian took over Bear's command, he brought up the 2nd Maryland, a large unit, and a North Carolina regiment. These shattered the rest of the Zouave Brigade and caused it to fall back. Rich and I were not happy, but we were not worried. The artillery reserve was waiting to cover whatever they might do.

Both Kevin and Matt finally got their troops to wake up and Matt brought his cavalry forward. ACW cavalry cannot charge infantry or artillery if the unit to be charged is in good order. Musketry would tear them apart and canister provides at least 4 dice at a +1 for closing fire which would do no one's health any good. Matt took his cavalry on a "left hook" passing in front of the Iron Brigade, the Irish and the 1st US Sharpshooters detachment added to the Iron Brigade. Transit fire ensued again and the guerrillas were destroyed, leaving the 6th Virginia alone.


The Union left stared at the Confederate right. The Union right had damaged the Rebel cavalry and the Rebel infantry had only just begun to move. The centre of both armies was a mess, with a brigade on each side broken, but the Union had a fresh brigade of Regulars waiting. Ralph said that going further would make no sense and we all agreed. We declared it a Union victory although all agreed that the Rebs put up a great fight and had nothing to be ashamed of.

We used just about all the special rule found in the Glory Hallelujah! supplement. That book give a real ACW feel to the game, in my opinion. Units cannot charge on initiative for the most part. Artillery canister has the potention to be horrendous and artillery ranges are huge. (48" for the 12# Napoleon; 60" for rifled cannon) There are even special rules for disorientation of units travelling through heavy woods and high standing grain. I think I've finally found a set of rules that are both playable and really reflective of the period.

Two things: During this game, we had a "house rule" in force. If you roll a 12/"Boxcars" for your command roll, the ordered unit "blunders." We decided that any blunder roll for generals with a command rating of 7+ immediately re-rolls this and that is the result. If you get a blunder again, you blunder. This does not apply to generals with a command rating of 6 or less. These idiots/political appointees/puffed up business magnates who have just reached their level of incompetence (cf. "The Peter Principle") get what they get. I think we all know that there were enough less-than-competent generals in the ACW. Second, I made it clear that any BP games I set up from now on with have another house rule: If you give an order to a unit and the roll fails, it fails. If you give the same unit the same order next turn, you apply a -1 to the roll, indicating that the unit receiving the order was able to comprehend it and do it. The more often the order is repeated, the better chance of it going through. If you CHANGE the order... whole new ballgame. You roll with no modifiers, unless the rules give you one for being "reliable" or some such.

As you can see. I like Black Powder as a rule set. It is not a simulation, but a very, very playable game. I've played games that saw themselves as a simulation... like Empire II. That pretension made it almost unplayable. If I'm going to drag my toy soldiers out of where they stay. I want to play a game, not wait while the simulation runs itself into the ground. That's my opinion; no one has to agree with me.

No gaming for the next few weeks for me -  reenacting and a first aid course take precedence. Enjoy yourselves, my friends.

I haven't "blogged" in a while. There's been a lot going on - from my health to family members' health to busy-ness in my ministry to reenacting to just plain being close to exhausted. With all that on my plate, I haven't taken the time to blog.

On Saturday, Martin and I played a game of Pike & Shotte , Warlord Games' set of rule for the "pike and shot" period of European history. We both like the period and have played this before. Derek joined Martin on the French side and Kevin joined my Swedish side. Andy, Bear, Ralph, and Matt all played a game of "Ronin" on the other table.

Martin and I set up and then Derek and I rolled for initiative. In an amazing display, we each rolled a D6... and matched each other for 5 rolls. We both rolled that same number as the other for 5 casts! I finally won the sixth one and got the first move.

I won the first move and got the infantry advancing as well as the left flank cavalry. The right flank cavalry froze up with the exception of some light skirmishing horse. Martin's cavalry came out to meet me, but his infantry - French guards, German mercenaries, and assorted lower grade scum - did not move. (This should've been a clue.) My infantry - Swedish guards, German and Scots veterans, and mercenaries of various nationalities - moved forward quickly, or as quick as you can in Pike & Shotte. Martin's main artillery were heavy guns while mine were medium guns. Both of us had plenty of light, battalion guns to accompany our infantry.

On my left, the Finnish Hakipelli charged a French Cuirassier unit... and beat them! I was amazed. They went on to beat another unit of harquibusiers (lighter cavalry but just barely) The third unit took the Finns down. The rest of my cavalry - harquibusiers and Swedish light horse (a similar type but gallopers) - did okay. One of Martin's cuirassiers charged a small unit of commanded shot (musketeers detatched from any pike unit) who actually survived, although it was very close. One of my Swedish horse regiments traded punches with the French and set them back, but it wasn't enough to shore up the flank totally.

On Kevin's flank, the two Swedish/Livonian cuirassier unit finally got going. The skirmishing horse hemmed in Martin's dragoons  who were trying to "dry gulch" Kevin's one infantry unit and its battalion guns. The other cavalry he had were not heavy enough to contain the French (who must sound like a junk man's wagon when the move) and were thrown back twice.

Meanwhile, both of our infantry brigades advanced and were torn up by the French heavy guns, light guns, and light guns. Derek's French guards were "elite" which permitted them to recover from disorder rather quickly. Their musketry took a toll on the Swedish Yellow Regiment and the advanced stalled. The Blue Regiment advanced through the Yellow Regiment and the Scots Regiments moved up quickly. In the end, the weight of the French muskets and artillery were too much. A French charge let us know that it was time to leave. We were graciously given the "Honours of War" as we retreated and left the French in possession of the field and with a minor victory.

The power of the Swedish army is in its tough and nasty infantry. I've been trying to get them into butt-kicking range as quick as I could in the past few games. In response, Martin has been holding back to "draw me into 20mm range", as my old games group used to say. It's time for some Fredrickian or Napoleonic stuff to come into play - oblique advance, refusal of a flank, gas warfare,  orbital bombardment - normal stuff like that.

Some day I'd like to field my army of O'Neill's Irish, but I'd bet that most games would run ring around them... unless I get the proverbial bogs and rough terrain. I don't know anyone who wants to meet a unit of Galoglaich in close quarters,


There's a few reenacting events in the offing soon and a first aid course offered through St. John's Ambulance. There will be some gaming, but not a huge amount until September. When I take my holiday in August, I hope to game during the week. There is also a SAGA "tournament" being planned in August that will cast a wide net over a few groups in South-western Ontario. (To my son, Rob: unlimber the Vikings and get ready. I'll send you for information shortly.)