En Garde! trial and the better part of valour 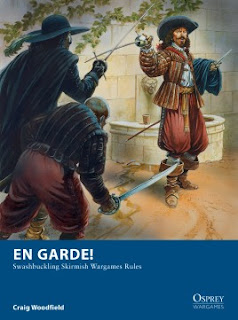 I joined in the fun at the Hamilton Road Games Group with the intention of playing one game and ended up playing another. When I arrived, a few people were playing the Sci-fi game "Sunder the Stars" using a lot of Star Trek ships. Another group were playing Osprey Publication's En Garde, a skirmish game set in the period of "The Three Musketeers." The first game ended rather abruptly, and I got in on the second game. The first game had minimal terrain and that was beefed up in the second game. Both Eric and I ran a small warband of 6 and 5 fighters respectively, musketmen, swordsmen, and a halberdier. Martin and his associate ran a similar group. The tighter terrain made for less distance shooting and there was a lot of hand-to-hand combat, which you'd expect with these rapier-swinging bravos. (Photos by Andy, Martin, and myself.)


In the first game, my swordsmen died by doing the stupid things I usually ask of troops under may command: you know, "Attack that swordmaster!", "Jump through that window!", "Hold your ground!" My musketmen, who had taken good sniper positions in a ruined house, fell back and left the field to the enemy. As I told Ralph, who was gamesmastering, "It's not my army!"

The second game saw an interesting mix. Martin fielded a force of Korean peasants from his list for Osprey's "Ronin", a Japanese Samurai-era skirmish game. One musketman, a number of archers, a few swordsmen, and one armoured swordsman. I fielded the same eleven man warband as before. Well, the Koreans die like flies... if you hit them. The archers have a slight advantage in that they don't have to spend time reloading, but they have a slightly tougher time wounding. Of course, Martin won and smacked my Portuguese mercenary band around with his peasants.

I found En Garde to be a fun, playable with some availability of simple dueling rules, such as attack, parry, riposte, and the "mighty blow." Firearms are matchlocks, firelock muskets, and pistols. Inaccurate and deadly if they hit, the balance is about right. The integration of the Ronin warband seemed rather smooth. (I've never played Ronin, so I can't say for sure.) I've got to try a Scots warband of muskets and sword and targe or an Irish warband of archers and Galoglaich. I have the figures so it shouldn't be a big issue. I look forward to trying it again. I'd even recommend the rules to those who would find skirmish gaming in this period interesting.

Posted by Grenzer John at 13:39 No comments:

Since I've been finding interesting art work of late, I thought I'd share some more of it.

These works are from the Polish artist, Jakub Rozalski. His subjects tend more to the "Steampunk" than the futuristic Science-fiction. He draws the inspiration for his art from Polish history and from some rather grim mythology. Some of his work illustrates an other-when Soviet-Polish War of the 1919-1921, a Polish rebellion against Tsarist Russia in the 1830's, the Warsaw Uprising of 1944, and some horrific (in the sense of horror movies) works from what he calls his "Wolfpack 1863." I'm not much for horror movies, but this man's work is very interesting. His early 20th Century Steampunk works are evocative of such things as the band, Steam Powered Giraffe, as well as some alternative fiction. Many of his illustrations are for video games where they set the atmosphere.


This is just a small sample of Mr. Rozalski's work. There's lots more... some of which I'm not as much interested in. The "historical" works I find intriguing. I recommend you look them up and enjoy them. I may do more another time.

I haven't been blogging much of late. I've been too busy now that I'm covering two Christian congregations, one Evangelical Lutheran and one Anglican. At least they're in the same town!

I have discovered an artist whose work intrigues me, namely the Swedish digital artist, Simon Stålenhag. I find his art fantastic, satisfying, and often at the same time, disturbing. Maybe all you folks who read my blog know all about him; I just feel I'd like to share some of his visions.


I have another artist in mind, but I'll save that for another entry.
Posted by Grenzer John at 13:42 2 comments: