Napoleonics Are Still My Favourite People 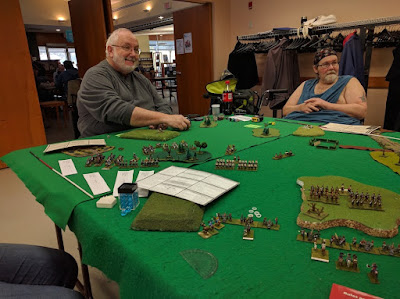 Without a doubt, the "Napoleonic Period" is my favourite gaming era. The colour, the tactics, the different systems... all appeal to me. I mean, just look at my face... if you can bear it. So at the Hamilton Road Gaming Group this past Saturday, I set up a Napoleonic scenario, using a Franco-Italian Army fighting the Austrian Empire. We used Arty Conliffe's Shako II rules.


I really like my Austrians.
Beth really likes her Italians.
Martin really likes his French.
Bear, Derek, and Matt really like playing the game.
Andy was present for the beginning but went home early, feeling unwell.
(Photos courtesy of Martin, Beth, and myself.)

Here's a look at the board at the beginning of the game:

The Franco-Italians (Martin as C-in-C, Beth, and Matt) were to capture the road in the middle of the table as a way of moving off the board toward the cities beyond. The Austrians (Bear, Derek, and myself) were tasked with throwing the Allied side back to the river line.

Martin and Matt had two infantry "divisions/brigades" each and Beth commanded four small brigades of cavalry. Derek and I had two infantry divisions each, one of his being all grenadiers, while Bear commanded two divisions of cavalry, one heavy and one light. The Franco-Italians decided to brigade all their artillery into one grand battery for which they received an extra general officer as artillery commander. (Each infantry brigade had a "foot battery" and the commanding general had a heavy foot battery to place at his discretion. The cavalry divisions each had a lighter horse battery.)

The Franco-Italians moved forward quickly. I had written orders for Bear's cavalry and Derek's reserve grenadiers to hold for turn #1 and move on turn #2. Beth's cavalry immediately went forward toward one of my infantry divisions, the one to the right of the forest in the photo above. What happened was not pleasant for me.

While Beth was chopping up my infantry into schnitzel, Martin and Derek were duking it out along the road in the centre of the field. Matt and Derek were also fighting hard. To Derek's credit, his grenadiers were out-numbered 2-to-1, but were holding their own against those odds. Bear maneuvered his light cavalry division to attack the grand battery, which evaded but was eventually caught by the hussars and slaughtered. (Way to go! Hoch Bear!) His heavies were taking shots from Beth horse artillery and were pushed back a bit although they recovered. (In Shako II, cuirassiers - or in may case, kurassiers - have the same morale as Guard troops. The morale rating is also a reflection of the fighting quality of a unit in this game.) As they recovered, they began to turn to face the threat of Beth's winded cavalry.


Meanwhile, Beth's blood-soaked cavalry turned the corner around the forest and met my second infantry division. They promptly destroyed the lead battalion, while the next three battalions were able to form square. (Hoch-und-Deutschmeister was salvaged!) Most of Beth's cavalry turned to face Bear's heavies, but some remained hovering around my squares, just enough to tie my hands.


Curfew was coming and things were winding down. Beth send a unit of dragoons to secure the road behind Derek, fulfilling the victory conditions for the Franco-Italians. We called the game and let it stand as a fairly decisive victory for the French and Italians. The Austro-Hungarian grenadiers proved their metal again and Bear made a mess of the Allied grand battery.

Lessons learned:
Everyone said they enjoyed the game, so it was a success. I lost badly and was mauled, but I so enjoy gaming this period. (<Sigh.> Some day I'll win one.)

I'm Waiting For My Wine, M'sour!

This past Saturday at the Hamilton Road Games Group, Andy wanted to try an experiment, mad scientist/wargamer that he is. He put together a Seven Years War game (French vs. British/Hanoverians) using a mash-up of Black Powder and Age of Reason with a special twist: The brigades orders HAD TO be written and  any changes in orders had to be written and handed to the umpire (Andy) who then determined when those orders might be delivered. In some cases... never!

Bear and I won the toss for initiative. Our mission was to capture the bridge on our far left flank. I intended to have Bear take and hold Shickshinny with Luckner's troops and more or less refuse the right, guarding the army's right flank with his cavalry. I sent Murray's brigade (Highlanders and line regiments) to take the bridge. Wolfe was in reserve with a Guards regiment, a combined grenadier battalion and two line battalions. He was to support Murray at 12:00 noon, but hold his ground until then.
Mark and Brian came on fast when they moved. A nasty firefight ensued between the Highlanders and Mark's French troops (who were "unreliable" but who did everything Mark asked of them) and the Highlanders ended up falling back and one English regiment was destroyed. I felt that Bear had misinterpreted my orders and had thrown his cavalry out too far. My repeated messages all went off into the some postal black hole. (Andy was gleefully dicing to see when messages would get through and did not had out messages with equal glee.) Martin seemed to send a lot of message and I thought his messages got through for the most part.

By this time, of course, all the plans we had were unraveling and the written message system was realistically frustrating, (It was a game and I actually kept my sense of humour.) Bear's infantry took the town and had to fall back once the French infantry came up but the town was contested right to the end of the game. Brian's infantry column felt threatened by Bear's cavalry and each regiment formed square while the French cavalry turned to engage the British horse rather than sweeping past. Murray's brigade was sorely hurt (one regiment vaporized, and the other three were "shaken.") Wolfe's brigade advanced but only barely got into the battle by the end of the game. My third brigade was being nibbled to death by Mark's and Brian's troops.


Murray's brigade was broken. Wolfe's was still coming up as the "rain" began to fall. (Our table-top reason to stop playing.) Cumberland and Luckner's brigades were holding on rather well, although some of Luckner's regiments were shaken. A few of Mark's regiments were shaken, but they really did quite well. I only learned that they were "unreliable" in the postmortem. In reality, Bear's ride came and the rest of us had to get on with other things. We'd call it a contested win for the French.
The system of blind delivery of messages and orders was the point of the game, and it made the game. We used the combat mechanics from Black Powder and the movement mechanics from Age of Reason. We all agreed that there needs to be clarification of the hybrid rules in those areas, but the order system made the game. Andy had been objecting to Black Powder's rules on command, feeling it was entirely too random. This hybrid experiment gave the game the right feel. Using Black Powder sized units gave the table top the right look, in my opinion.  Using the weapons' ranges from Age of Reason required us to get "up-close-and-personal" right away.
Had more people been able to play as brigadiers, Martin and I might never have seen the tabletop at all! Cudos to Andy on this! We'll do it again. Maybe next week.


In a message Martin sent to me, he said he was sending a case of wine to my heardquarters. I don't know wine, but I think the vintage he spoke of was a-kin to vinegar or Windex or carpet cleaner. I sent a note back (which Andy promptly lost) saying "Thank you, Mon General... you raunchy B*st*rd!" Martin got a kick out of that.
I may have missed a few things in this report, but I sure enjoyed the game.