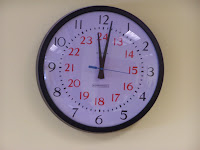 {This sounds like a very bad, B-movie on "Schlock Theatre.}
Really, it's an after action report from Saturday's Hamilton Road Games Club gathering. It was a "scripted scenario" where I ran all of the Germans and the other players (Brian, Robby, Lainn, Stephen, with Andy supplying military advice and colour commentary) ran British Commandos for a coastal raid on a listening post. Their mission: to destroy or disable the listening post. The Commandos were and elite force of crack troops. (Disposable Heroes﻿ calls them elite and gives them sky-high morale) but the German defenders were Festungsinfantrie whose morale was less than stellar (-1 from standard infantry) and whose eyesight proved... how shall I say it? Oh, heck! The sentries were blind! The German reinforcements who would arrive when certain conditons were fulfilled were a column of Security troops with an AFV.
So here was the set-up:
﻿ ﻿

The Commandos landed in small boats since I couldn't get the Higgins boats models done. (Paper ones; very nice; write me and I'll share.) Each boat had a Bren gun. The Commandos - 2 sections, 1 command section, a sniper team, a mortar team, an extra Bren team, a Vickers gun, and a section of Engineers... with a flamethrower, about which I'll say more later. The Commando sections and Engineers were carrying explosives. The boats landed safely since it was night (-2 to spot) and the sentries were myopic. The corporal saw *something* but didn't sound the alarm. He called the command post and the staff sergeant ran over. (Andy says staff sergeants don't run... ever. He also says sergeant majors stay still and let the universe move around them... at whatever speed the SM decides.) The commandos threw up grappling lines and begain to climb the walls. A sentry came out of his stupor and fired a shot at the climbers. He missed and got knifed by a commando.
﻿﻿ ﻿﻿ ﻿ ﻿
﻿ ﻿
﻿ ﻿


The staff sergeant hit the alarm and fired a signal flare. The corporal engaged the commando on the wall opposite him. (He would have been in line for a promotion had he not been "killed.") Three LMG crews woke and ran to their weapons. The three-man AA gun crew ran to their weapon as well. The lieutenant, two other privates, and the gate guard ran into the court yard. Herr Leutnant made it to the CP, but the other were taken out by rife fire and the assembled Vickers gun. The engineers ran for the tower with the antennae on it - a good guess of where the listening equipment was. Lainn gleefully flamed the tower where the German staff sergeant squeezed off a few shots while the rest of the RE section headed for the listening tower with charges. Robby's mortar fired smoke to no effect, but lobbed an HE bomb onto the listening tower where an LMG crew was busily and effectively engaging the commando on the sea wall. The mortar bomb ended that. Three commandos took on the staff sergeant hand-to-hand on the tower. They beat him, of course, but he took one with him.
﻿ ﻿
﻿ ﻿
﻿ ﻿
﻿ ﻿

Now the motor were nearer and Stephen placed charges in the road while his sniper team took pot-shots at the crew in the towers. Brian's boats and commandos pinned down the AA gun crew and finally caused them to run back into the lower level of the tower, less one crew member after firing at one of the boats. His section watched for the relief column as well. Robby's command section went in with knives against the LMG on the sea wall tower. This conversation ensued:
"Dad, there's one MG crewman left. Can I throw him off the wall?"
"Roll to see if you hit him first."
(Rolling) "I hit him; can I throw him off the wall?"
"If I roll {this number or more}, he goes off the wall."
(Rolling)  "Ahhhhhhhhhhhhh! Thud!"
(This why it's called WarGAMING!!)
Stephen set the satchel charges well (with assistance and advice from Andy, Lainn, and Brian, military veterans all), because it blew up the second truck with all aboard. Brian's commandos fired at the tank which returned fire, failing to hit anything. The Commando side pointed out that small arms couldn't hurt the 38t﻿, so all this firing would only make the tank mad. It did end up chasing his section right down to the beach.
Lainn's engineers set off the charges which destroyed the listening gear. The last man standing on the roof, the LMG section's sergeant, dived off the roof to his death. Lainn also hosed some more flame around "for effect." (He seemed to be having a load of fun.) Robby fired the flair signalling "Recall" and the commandos headed back to the boats. The 38t chased Brian's section to the beach but couldn't hit them in the dark. The number 1 truck unloaded troops at the gate, but the rest of the convoy was stuck behind the burning truck as the commandos faded into the dark of the Channel.
﻿ ﻿


﻿
We all enjoyed ourselves in this short scenario; a few of us had to leave early because of other committments. Next time, maybe there'll be fewer LMGs on the boats; that was too deadly, or the shore will be further away. (There are only so many tables that we can use.) Andy wanted to try to use tan and blue felt squares to represent beach and sea and they seemed to work well.
I knew that the Fortress troops couldn't stand toe-to-toe with elite commandos. As it was, even in hard fortifications, they were pinned easily because of their brittle morale. These were not top of the line troops on the coast! Maybe next time, TWO relief forces and HMGs in the towers. I think in gaming, balance is a result of experimentation and trial-and-error.
A few last photos.
﻿ ﻿
﻿ ﻿
﻿ ﻿

Posted by Grenzer John at 12:49 No comments:

In the midst of a rather frantic holiday and prior to surgery my wife was to undergo, (She came through it fine although we still have some recovery to take care of, thank you.) Beth and I decided to run a Napoleonics game. We get in about one a year, although we have plans to do more smaller games to stay familiar with the rules. ("Shako") We both ran 1809 army lists. Beth's Italians were very regular with a few 2nd rate regiments, lots of skirmishers, and 6 cavalry regiments. My Austian whitecoats had large regiments, a whole division of 2nd-raters including some Grenz battalions formed up, 5 cavalry regiments, and a bit more artillery. I ended up grabbing a ridge line close to my side of the board and I decided to stay there. As Beth's center divisions advanced toward my line, her left flank cavalry (dragoons and Garde d'Honneur) attacked my hussars on the right. They sent the Kaiser's Hussars packing, never to return, but had to fall back as another hussar regiment came up with a cavalry battery. On my left, her light horse destroyed a Grenz battalion as it attemped to form square... it was not pretty... until my dragoons, chaveauleger, and Kurassier regiments met them head on and routed them. A rifle-armed jager battalion assisted.
In the center, it was an artillery duel. The Italians had loads of skirmishers while the Austrians had some. I kept them close to the ridge and fell back through my line infantry (all in Divisionmasse which moves slow like lines, takes hits like a column, shoots at a -1, but can bounce cavalry without resorting to square, although not as well as a square.) As her infantry moved up, Beth asked if I was ever going to leave the ridge line. I said "No." (I'm not a total fool, just partial.) So we called it a draw and went to eat dinner to end my holiday. As I said above, we've decided to run small, brigade sized actions to exercise our minds and the troops. I continue to work on British, French, Turks, and ocassional Prussians and Russians.
Shako might not be to everyone's liking, but it works for us. As I get older, I find myself preferring simple,  playable rules. I guess I don't have the time or brain power for much else.
﻿
﻿
﻿
﻿
﻿
﻿
﻿
﻿
﻿
﻿﻿﻿﻿﻿﻿﻿
﻿﻿﻿﻿﻿﻿﻿﻿
﻿
﻿﻿﻿
﻿﻿﻿


Not a bad way to end a holiday. Today, Beth and my son were playing Warhammer Fantasy as Robby prepares to field a Wood Elf force. He's been checking through my Empire troops and they played to get familiar with the rules. I'm sure there will be more on this later.
Posted by Grenzer John at 15:22 2 comments:

Because of the usual way that life gets in the way of living, I'm a bit behind on reporting to whomever reads my stuff. Last weekend, the family and I were at the reenactment of the siege of Fort Erie, at the actual fort in... Fort Erie, Ontario. (You should have seen that coming.)
﻿ ﻿

The last game we played at the Hamilton Road was a hedge-row assault against dedicated German defenders by US troops using the Disposable Heroes rules. The US didn't do all that well. I have a difficult time exposing my armour to the hidden PaK-40 and we used too much smoke from our mortars. Still the game was enjoyable and any day we get to play is a good one.


I seemed to be in command of the US side, and I proved too timid, even with the two Shermans and the M3 halftrack. I'm going to take blood-thirsty lessons.
One last thing... I actually showed off the remnants of my Warhammer Empire army in 25/28mm. Spears and pikes.

Posted by Grenzer John at 08:47 No comments: