Traveller Between Christmas and New Year's 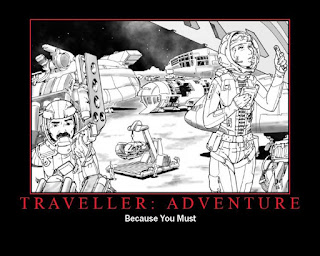 Since I've a few days off over the time between Christmas and New Year's Day, our gang was able to get a Traveller game in. It had been an unconsciously long since our last session, but that didn't seem to faze the crowd. Some new player joined the gang and some of the old crew made new characters to challenge themselves more.
The one character everyone enjoyed being around was "Crazy", played by my daughter, Katie. This character was a noble (sort of) but had at least four or five personalities, one of which was a child, another was catatonic, while a third was a berserk fighter. Katie didn't kill her off but put her "on furlough", to return at another date after she travels with some relatives who want to help her.
Katie introduced a new Darrian character.
Nia came with a deserter from the Imperial Intelligence service.
Jesse came up with a noble who squandered his inheritance and had to "disappear" since the family was not at all pleased. I rolled for an out-of-wedlock child somewhere, but the dice said "No."
Beth continued to play her medical doctor/chemist who might be a Zhodani... but no one is sure.
Tyler resumed his play as a pirate with a hyper-intelligent monkey (who can't speak) and a constant barrel of rum.
Tyler's son, Thomas, played a Vargr infantry Trooper. Thomas started very young and this character will be fleshed out by Thomas and his dad now that he's of an age where he can understand RPG's. (He already understands rocket-propelled grenades.)
Ken plays a home-brewed character called a "Quendi", a sort of "space elf" in the Tolkien-esque tradition rather than the shoe-maker's helper tradition.
DJ leads the intrepid crew as a retired Imperial Marine Force Commander, all aboard the corsair Dark Iguana.
The NPC's include Vasil, the engineer, Yogi and Boo-Boo, both Ursa combat veterans, hired to handle heavy weapons, and Karl, the human who transferred his consciousness into the ship's computer system. He can enter an android body if he wishes, but then he's out of contact with the ship's systems. I have to be careful that this doesn't break the game. DJ doesn't really trust Karl.

Beth took all these pictures...

The game included hiding from search drones, spitting back at cyberattacks on the ship's computer, disguising part of the crew as EMS and sneaking aboard an opposing ship to lift some computer hardware, and finally recovering a piece of interesting equipment from a derelict battle cruiser and "returning" it to the Imperial Navy - with some decision making help from two platoons of Marines and a atmospheric frigate. 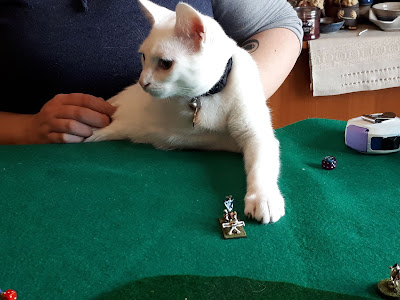 It's almost a tradition for my daughter, Katie and I to have a game on Christmas Day or Boxing Day. This year it was Christmas Day with my son, Robb acting as rules source/referee and while he and Beth cooked our non-traditional Christmas dinner - Teriyaki Salmon and a vegetable stir-fry with rice. (Say what you will, Traditionalists, it was delicious!)
Katie and I fielded Elves and Kings of Men in 10mm for Kings of War, a game set we all enjoy. Katie's 25mm army is still in the process of being painted and the Warmaster armies are available and adaptable. We use metric measure rather than Imperial, measuring in centimeters rather than inches. It works just fine for 10mm figs! There are a few other small adaptations we make as well. We even used the KoW 3rd edition, since the Uncharted Empires book arrived on Christmas Eve.
After set up, I took the first move and it didn't take long to get into pike range. Robb advised me to make some interesting unit choices; I'd never taken Kings of Men berzerkers before. Katie conscripted assistance from her cat, Maeve, who insisted on smacking around a bolt thrower or dice when ever she could! We played a scenario called "Loot."


After that flanking movement came, Katie conceded the game and I was declared the winner. I don't win often so this was a Christmas surprise.

Posted by Grenzer John at 09:21 No comments:

Email ThisBlogThis!Share to TwitterShare to FacebookShare to Pinterest
Labels: at home, Elves, Kings of Men, Kings of War, Maeve

In The Bleak Midwinter... 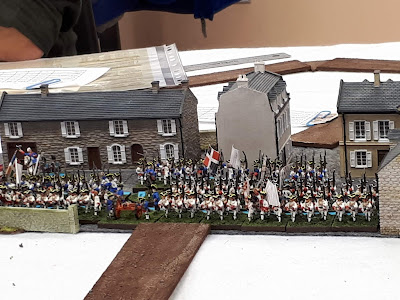 On the Saturday before Christmas, Andy and I set up a Seven Years War game using our mash-up of Black Powder and Warfare in the Age of Reason. We use the rules from Age of Reason except for the ranges and system for shooting and melee with we rob from Black Powder. Why? Age of Reason has very good points for movement and command-and-control; there is no rolling for double or triple moves or no moves at all. Black Powder has superior "fightin'" rules - simpler, more to the point, and easier to handle. Andy generaled the French while I, in a blaze of arrogance, ran the Prussians. (I hope die Alte Fritz will forgive me my failings as a general.)
The Prussian side moved onto the table along roads for the most part since the table was considered to be snow-covered. It was a rare winter battle. The French held the town and the Prussians were charged with getting around it. The terrain and the cold did not make that easy. Roads make for fast movement in a non-combat formation while the line formation is better for fighting and shooting, but its slower. Be that as it may, the game was fun and it ended in a draw (although I'd be inclined to give the trophy to the French since they held the town at the end of the game.)
Now for pictures:

The battle was inconclusive and was declared a draw at curfew, but it was fun. The massed figures always look good and the period is interesting.
Posted by Grenzer John at 08:30 No comments: