“Without music, we wouldn’t have an Army.”

A number of years ago at the Hot Lead convention Bring-n-Buy, I picked up a French Napoleonic military band molded by Miniature Figurines. I think it's an old set. It sat for many years in a box of yet-to-be-done figures. I finally got around to painting them and lining them up. I have yet to flock the field, but I'm rather pleased with the outcome.

As a person who was a professional musician for a while (which mean I got paid to play, but not that I made my living playing my instrument), these were fascinating figures to paint up. They're using some obscure and often obsolete instruments. They're also playing instruments that are not often seen in North American field bands, like oboes and bassoons, although those can be seen in British bands. Neither the piston valve nor the rotary valve had been invented yet and the woodwinds were played without the benefit of the hole-covering mechanisms used in modern clarinets and saxophones. A Belgian instrument craftsman named Adolphe Sax invented the piston valve for brass instruments (like the Saxhorn - see below) and the Saxophone in the 1840's which changed the playing of music quite a bit from that time on.

1.) The title of this episode is from Robert E. Lee. I don't care for his politics, but I respect his military skill.

2.) Troops marched to a much slower beat in the Napoleonic era. If I recall correctly (and I may be wrong) 65-70 steps a minute. The French later pushed that higher. Normal march tempo today is around 120 steps a minute... unless you're British "Rifle" units who move at an odd double time or Italian Bersaglieri who run in step... even the band! (Look it up! It's wild!) {Bersaglieri}

For lack of a better term, the "hautbois" is just about the same as the modern oboe. 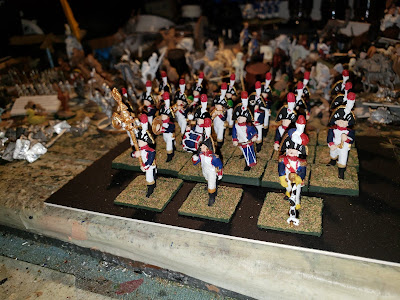 If you're interested in the music of the period, there's plenty available. One of the best pieces in my opinion is Bugler's Dream by Leo Arnaud (Bugler's Dream) which is believed to be based on French Napoleonic cavalry trumpet calls. Of course, there's always The Victory Is Ours /La Victoire est a Nous. (The Victory Is Ours) That shakes everybody up, although it's part of a larger march.
Posted by Grenzer John at 12:40 2 comments: 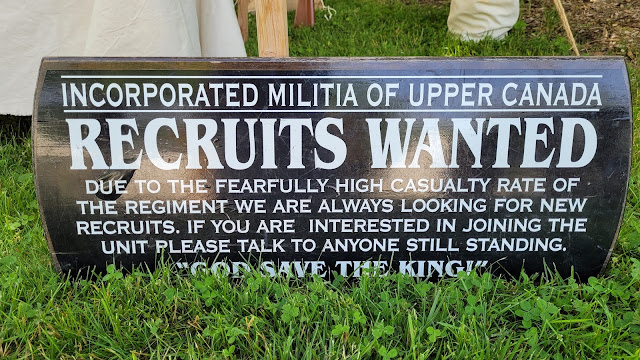 This year's event (June 25-26) at the Backus Page House Museum in Wallacetown, ON, celebrated in particular the Fleming family, a family who settled in the area after the American War of Independence (although no one appears to be sure if they were displaced Loyalists or people who simply wanted to get away from the fighting.)

In any event, the site was lively with about 90 reenactors present, with sutlers and staff added in and then visitors. The attendance of visitors was lighter than the past two years, but there were other events going on in the area to compete with ours. The weather cooperated for the most part. Your humble blogger was the commander of the forces of the Republic (17th, 21st, 22nd, and the Canadian Volunteers) while Many Strings, a veteran reenactor of Mohawk warriors, was over-all commander of the Crown forces. (the 1st of Foot/Royal Scots, the Incorporated Militia of Upper Canada, the British Indian Department, Caldwell's Rangers, and His Majesty's Woodland Allies) Both days saw a "house raid" in the late morning where US forces raided and "burned" the Fleming house only to be chased off by Crown forces. (The Fleming household was actually burned in MacArthur's Raid in 1814.)In the afternoon, a skirmish on the hillside behind the house, letting both the artillery crews (the Provincial Marine and the Earl of Moira) and the infantry formations burn some powder. We always end with a salute to the audience and a moment of silence for those who lost their lives in the service of their nation or in service of the land. (Sad to say, I forgot this on Sunday.)

Now... it's photos you want to see. These are courtesy of Steve Zronik, Tara Haves, and the staff of the museum.

In the afternoon, the action was on the hill behind the museum's buildings.