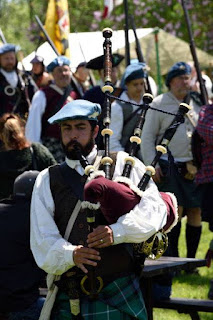 For the third time, the yearly event memorializing the Battle of Culloden of the 1745 Jacobite Rebellion was held at the Backus Page House Museum in Wallacetown, ON. I've been taking part in this event for these past three years and I joined in one held in London, ON about eight years ago. My wife, Beth is on the museum board and is a volunteer for a number of events there.

I'll leave it to you, good reader, to see to the details of the conflict. It's called a "rebellion" since the Scottish Highlands (and others) rose to support "Bonnie Prince Charlie" against the Hanoverian king, George II. It might be better characterized as a civil war. Whether the Stuarts or the Hanoverians were the legitimate kings of Great Britain is a discussion for both wiser and harder heads then this author. Let it be enough to say that the event is popular one to many reenactors, especially in the Wallacetown area where many Jacobite clan families were eventually settled. Colonel Thomas Talbot set up the land grants for the crown in the 19th Century and he gave the choice lands to... everybody but the Scots, since he didn't like them.

The event itself is a lot of fun. Saturday, May 20 was an absolutely gorgeous day - cool, bright, and breezy. My son, Rob, and I served with the Sutherland Independent Companies, a militia unit. Andre, who portrayed Col. John Campbell, the Earl of Loudoun, had hurt himself and was barely able to speak. So since I was his sergeant last year, I was promoted sergeant major and served as his voice in the field and in the camp shenanigans. The turnout of the public was quite good and there were a large number of Jacobite clansmen present. The Government forces were smaller, with the Sutherland Militia, the soldiers of Clan Campbell, and both grenadiers and "hatmen" from the regular army represented... and cannon for both sides. (Photos courtesy of Beth, of Laughing Devil Photography, and of William J. Wright. My thanks to all.)

In the afternoon, the reenactment got loud, with a battle scene based on a MacGregor ambush of Government troop near a small fort in the highlands. Andre led the Royal Scots and the Campbells to reinforce the fort, which was held by the Sutherlands and a mixed group of regulars as well as a small artillery piece. The Jacobites attacked from three sides, much to the delight of the crowd.

Sunday was not as nice a day. Rob and I made it out to the Museum shortly after noon. The rain had turned the hillside into a muddy, slippery mess. So the Museum director consulted with the reenactors and event organizers and all agreed to cancel the day's activities. Disappointing, but just as well. No one wants to see people hurt. So we collected Beth (who had stayed the night at the site), packed up our tent, and went home. So until next year - on the Victoria Day weekend. Come out and visit the Government camp! And the Jacobite camp! And the lunch canteen!

Next at the Museum: 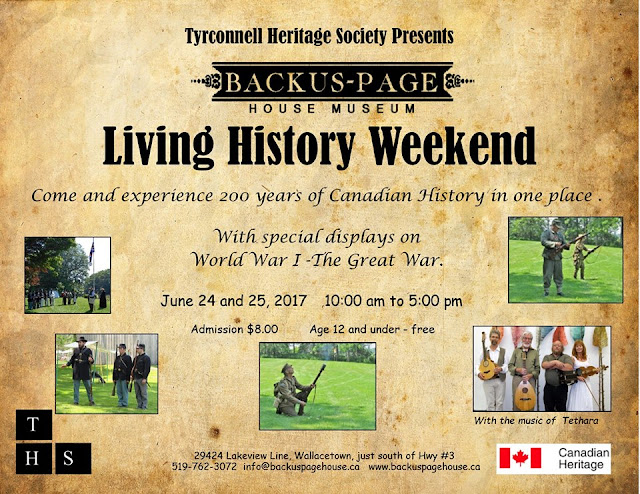 Posted by Grenzer John at 12:33 No comments:

For any number of reasons - many of which don't merit repeating here - I haven't blogged much lately. Since few of you, my usual readers, are waiting with bated breath for what I write, I'll just add a little to what has gone before.

Last weekend, I had taken the weekend off and gotten a supply for duties at the church. My family and I intended to go out to the Longwoods Conservation Area for the first reenactment event of the season.


But it rained.
I mean it poured.
I mean parts of Toronto and Ottawa, the province of Quebec and the Maritimes were flooded.
The army was called out to aid in rescue and damage control.

So we stayed home, had a few friends in and played board games... of which I cannot find any photos. You've all seen games of Risk and of Ticket to Ride, so I will rely on your memories and imaginations.

Sunday dawned bright, glorious, and DRY. So we went out to the Conservation Area and met with our old friends from Fort Meigs, OH and their group from the 2nd Artillery. Some members of the Canadian Volunteers were also there as were the members of the 14th Infantry. This last crowd are actually members of the group that reenacts the 41st Regiment of Foot of the British Army. They just turn coat sometimes. (The following photos show what a nice day it was and all are courtesy of my wife, Beth.)


Congratulations to Matthew, who served his first battle in the line and did an admirable job. He did the drill and learned his lessons, even though he was not given cartridge and powder on his first time out.
Posted by Grenzer John at 14:35 1 comment: