Do you remember that WWII movie? Something out of the Italian campaign, if I recall correctly. Anyway, Sunday afternoon saw Robby and I facing off over the table in our sunny front room, his Canadians vs. my late war Germans. (Iron Ivan's Disposable Heroes on a 72"x60" surface. AnHQ section, 2 infantry squads, 2 HMG teams, and a sniper team each.) 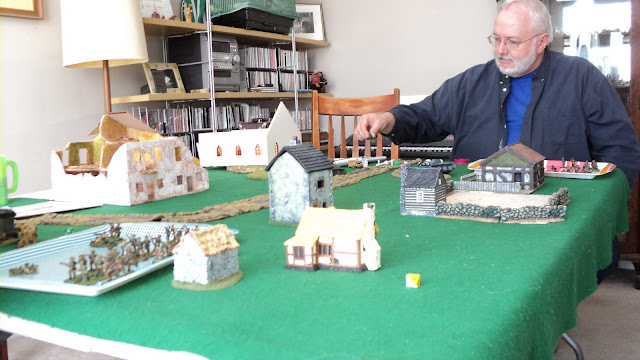 Preping the table.  The ruin on the left was a Hot Lead Bring&Buy purchase. 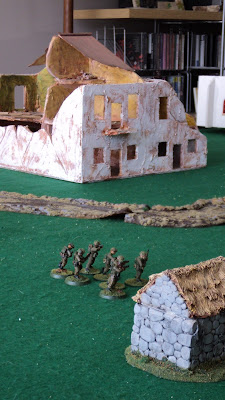 The Canadians advanced into the teeth of what you see below! 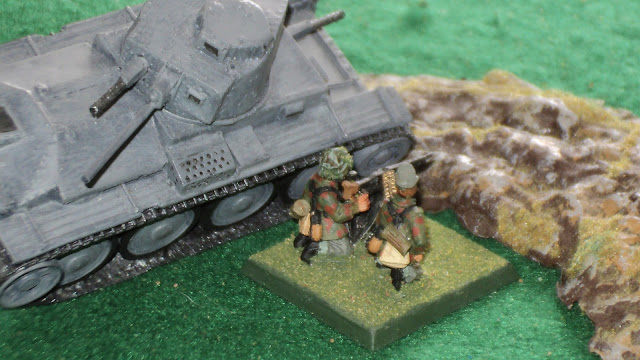 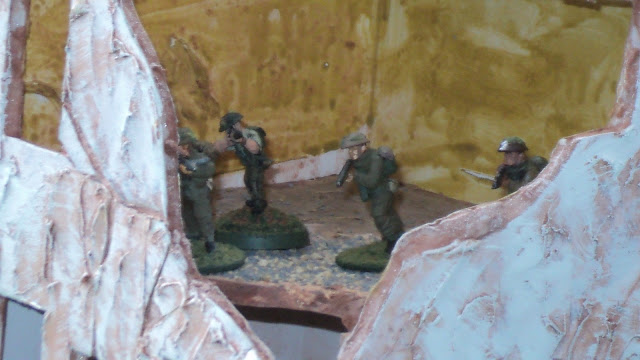 Another group of Canadian got into the ruin and pinned the HMG, but took it on the chin from LMG and sniper fire. 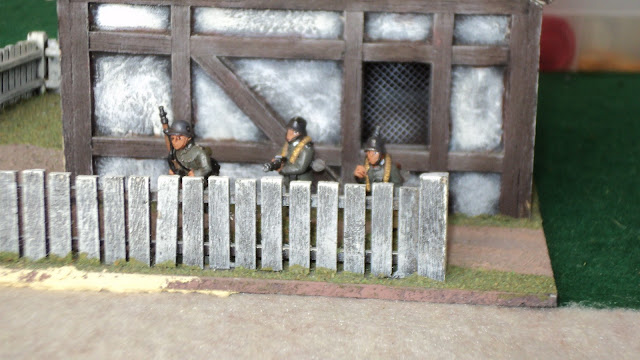 Some of my troops on my left came through a house and engaged the Canadian HMG in another house... which served as the arm-rest for this photo! 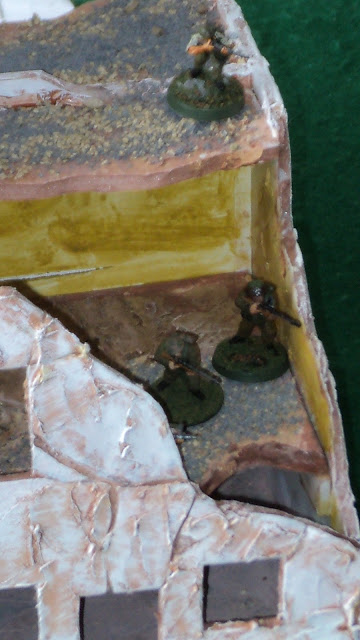 Canadians rifles and a sniper (up top) doing their best to do their worst. As it was there was more cover on my side and it was accessible on the first move for the most part. We called it a day after Rob was whittled down to an HMG crew and two other figures.
The moral of the story is: hide behind stuff, and be careful when your wife sets up the terrain.
Most of my gameing friends find the Iron Ivan rules to be clean, simple, and fun. All of their games use the same mechanics of play with variations according to era and weapon. Since Rob has most of the stats memorized, it goes quick. We've used the Iron Ivan rules for skirmish gaming in F&I, WWII, WWI, SCW, ACW, and 1812. We've also used the Pulp rules ("Where Heroes Dare") which is not everyone's cup of tea, but I think it makes for a fun time. {Reminder to self: post photos of Brother Othmar of the Vatican Hit Squad and his flame thrower.} Speaking of a cup of tea... that sounds mighty good just now!
Posted by Grenzer John at 14:58 No comments:

My son and I just returned from a great convention in Stratford, ON -  Hot Lead. We really enjoyed ourselves, caught up with some old friends, and found some great bargains at the Bring&Buy. It's smaller than some conventions I've attended (Historicon, Fall In, Cold Wars) and larger than some (MIGSCON, the abortive Lehigh Valley gaming convention.) There were lots of games going - RCW, Alexander vs. Indians, Lexington, WWII aviation - all nicely laid out.
You'll see some of the purchases once they're painted or used in a game. I even got my wife a new Sherlock Holmes/Dr. Watson set for her collection!
If you are in southwestern Ontario at this time next year, consider going to Hot Lead. It has never disappointed.
Posted by Grenzer John at 13:52 1 comment:

A photo from a game at the Hamilton Road Gaming Club in London, ON. U.S. riflemen take cover behind a damaged wagon in a game that was a mash-up of Iron Ivan's "This Very Ground" (with War of 1812 additions) and the same company's "Where Heroes Dare" pulp fiction rules. The greatest part about the game: Everybody won! Each group had an objective and they all achieved their's.

The State Militia held the crossroads and recovered food and liquor. In the background, the First Sergent confers with the Rifles.

The Glengarry Light Infantry Fencibles advance to find a patriotic farmer's wife who has information vital to the defense of Upper Canada.

The British regulars were tasked with finding provisions - seen here as beef on the hoof. They also found a pay chest with the NCO's guarded to prevent.... snacking.
Posted by Grenzer John at 12:08 No comments:

Oh, yeah. Why the title? I'm of Irish heritage and I'm a musician... among other things. The lyrics go like this:
"The minstrel boy to the war has gone,
In the ranks of death, you'll find him."

Someone said that among the Irish all the songs are sad and all the wars are merry. So what about battle songs? Even table top battles...
Posted by Grenzer John at 09:37 No comments:

With the help of my wife, I've finally started a gaming blog. (I've never done this before because I'd always felt I didn't have much to say.) So I'll start... anyway.
I've enjoyed wargaming for quite a few years. I started with Roco Minitanks in a sandtable in my parent's basement. (I'm not counting throwing rocks as Airfix figures in the neighbour's yard.) I cut my teeth on "Column, Line, & Square" and WRG Ancients. Since then, I moved on to "Fire & Steel", "Empire II & III", WRG pike & shot, "Command Decision", and a lot of other rules. Role playing, too - AD&D, Traveller, Boot Hill. Now I play a lot of the Iron Ivan small unit skirmish games, "Shako", "Koenig Krieg", AoR, WarHammer Ancients (with WarHammer fantasy on rare occasions), "Wings of War", "A Sky Full of Ships", "Don't Give Up The Ship", t20 Traveller, and others.
As I've gotten older with less time to spare. I've found that I want to play games that are fun, games that don't take ages to set up, with mechanics that are simple enough for my cluttered mind to handle. The priority word is FUN. If it isn't fun, why play it? There's so much else in our lives that isn't fun. It isn't "therapy" either. If we do things only for "therapy", then some part of our life has taken over the whole and we do things to feed/clothe/clean/sharpen the main part of our life. If all fun is only for "therapy", we're not having fun. We're feeding the monster that's eating the rest of our life... a few bites at a time... until there's nothing left.

That's not living. So I do this for fun. I hope those of  you who read this will agree with me on this much. Beyond that, it's all debatable.
Posted by Grenzer John at 09:33 No comments: