The Hamilton Road Gaming Group found it's way into the steppes of Russia on Saturday with a Disposable Heroes game - Soviet Russians vs. National Socialist Germans. With 7 players and 2 "overseers", over 200 Russian figures and 8 Soviet tanks in two waves with reinforcements, Germans in trenches, and Robby's scheming Hetzer, it was quite a game. 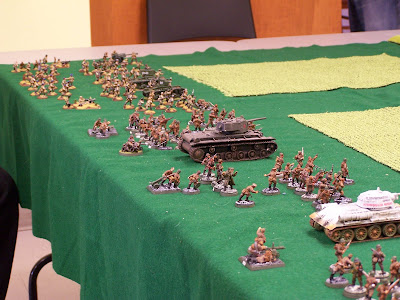 The Soviet left flank gets ready to advance across an open field. This was to be an early war straight assault by a massive group of Russian infantry with some armour support - hence the KV-1, the T34/76, and the two T26 in the infantry group. The double turreted T26 didn't last long. The German "Crash-boom" AT gun saw to that. 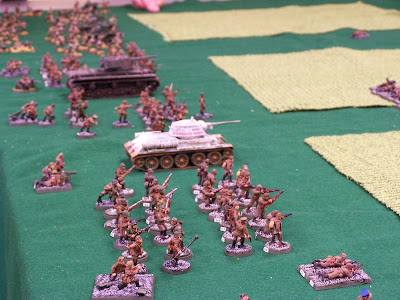 More of the Soviets with a mortar, sniper team out front, and an anti-tank rifle in the third rank.
﻿ 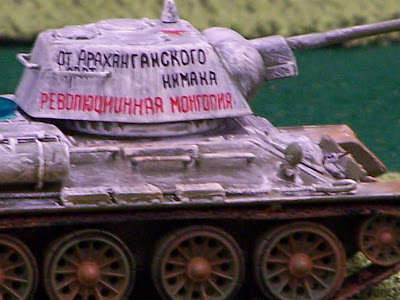 A detail of one of Andy's T34's. Patriotic slogans
﻿ 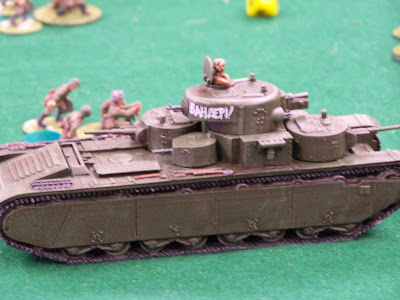 The beastly T35 (5 turrets, 11 crew) which DIED the second turn after it was deployed. The Hetzer took a shot and disabled it, causing the crew to bail out. The next turn Robby shot it and destroyed it with... an ANTI-TANK RIFLE which hit the main turret, the least armoured spot on the machine! Then the remarks began: "Captain, the billiards room is filling up with smoke!" "Captain, there's a hole in the casino wall!" Such a laugh. Too bad, it was part of my command.﻿ Nice model, Ralph. 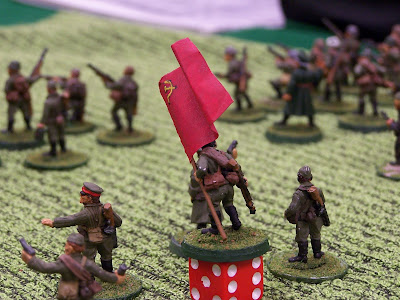 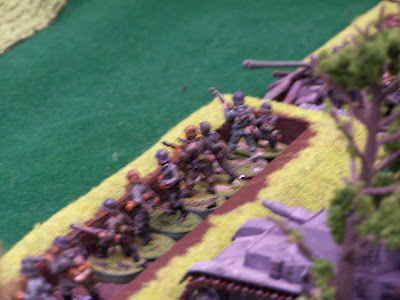 The flag bearer takes a prominent place in the advance. Luckly, there were six-siders in the field. The dark green figure in the background is a "Political Officer", one of three who saw a lot of business that day, assisting squads to recover their morale by... shoting one of the squad. (The rules allow it.)

Early in the game, the German trenches were busy and packed. Andy's trenches made their debut in this game.
﻿﻿
﻿﻿

On the Soviet left, the troops chased the Germans out of the trench works. On the right, the Red Army whittled down the German until they withdrew. In the centre, there was a hot and heavy fight over a farm house with grenades being exchanged (the hard way) and a German Marder holding strong until it was knocked out. The German troops withdrew to another defensive line a ways back - off the board. A marginal victory for the Socialist Motherland, but a good strategic withdrawal for the National Socialist Fatherland.
﻿

﻿
It was  a  good game for sure.﻿ That'll be my last game before Easter - a busy time for me. The week after Easter is out, too. Longwoods! The first reenacting event of the season.
Posted by Grenzer John at 12:26 No comments:

Therapy and other myths

(This is an old sore spot of mine, so this may degenerate into a semi-rant at some point.)
I've heard a number of people call what they do for fun, "therapy." Whether the activity is golf, chess, motorcycle riding, hiking, cooking, what-have-you, people use it as "therapy" to unwind and get away from their every-day activities. I realize that not every job is fun; I know that through personal experience. People need to get tensions and frustrations out of themselves and often leisure time activities serve to do that. What I object to is the use of the term 'therapy' for those activities. It seems to place such activities on the level with medication, physical therapy, diet, or psychotherapy.
Dictionaries say the word comes from the Greek therapeia, and from therapeuein, to treat medically. I feel that applying therapy to leisure time activities, equates our work with disease and dysfunction. Secondly, it implies that leisure time activities have a secondary place (at best!) when compared to what we do to make a living. No doubt, bills must be paid and the bulldog must be fed. Still, I'm saddened by the idea that we are economic animals only, and our work is the source of all satisfaction in our lives and if it isn't, we are diseased or dysfunctional.
We are more than that. Our soul/spirit/inner being is fed by our work AND our play. Balance is always the thing we strive for; Otherwise, we'd never take vacations. I'm mistrustful of the mindset that places work ahead of the benefits of working, career ahead of life.
For my part, I've got lots of toys to keep me busy out side of what I do as a career - as much as I enjoy that! But my play is not therapy, permitting me to pour more of myself and my energy into my daily work. My work is more important than that; my family is more important than that and I'd never call them "therapy."

Return to your lives , Citizens! I'm done for today.
Posted by Grenzer John at 11:26 1 comment:

I played an American Civil War game on Saturday at the games club. (Home-brewed ACW varient of Iron Ivan's "This Very Ground" F&I rules.) I was going to post some photos but they were so wetched, I couldn't bear to post them. So I'll say the game was good. As Andy says: when you get to play, you win! Still I know I could have done better. I tend to "lock step" my units. Next time I'm going to mix them up and use different formations. I forget that the ACW is not the Napoleonic Wars... just like the generals early in the war did.

All right I'll show some pictures. Here Phil's Federal troops have taken it on the chin from Mitch's Confederates. By the end of the melee, there were some prisoners in blue to march away. (This is one of the clearer photos.) I ran the Rebel centre and got ripped to shreads in a melee in a wooded area. Two platoons down! Nicely done, Andy and Kevin! (I'll nurse my revenge for a later date.) 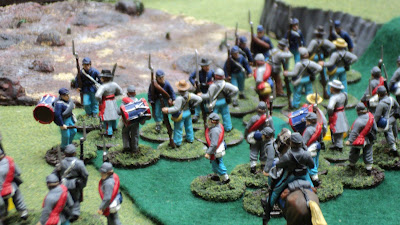 This is an interesting photo﻿, taken through Kevin's tabletop periscope. It's a nice piece of equipment and I'd like to get one. A better photographer would take a better photo, but it's worthwhile just to see the "figure's eyeview." 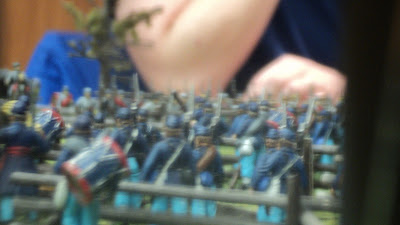 Lastly, I was taken in by a delightful hoax for April Fool's Day, perpetrated by Prince August Moulds. They put up a YouTube video showing the use of hot glue as a casting medium. I thought "Oh, yeah!" When I looked at it again and at the article on the website, they had confessed to the hoax, but also said they had received so many notes of interest, they were going to research it further. With the price of metal, it'd be worth looking into. I don't know how such figures would hold up or how well they'd hold paint, but it would be a kick if a cheaper material could be found. Now where can I get 25mm or 15mm moulds?
Posted by Grenzer John at 10:58 No comments: