Many of the blogs I look at regularly feature some of the painting of the blogger. I've decided to follow suit and show some of my latest projects.

More of these later, as I finish flocking a backlog of troops.

Merry Christmas and a happy New Year to everyone who reads this! God be with you always!
Posted by Grenzer John at 16:49 4 comments:

Today, it ended up that the entire group at the Hamilton Road Gaming Group played one game! We took to the seas and sailed to 'whatever' using the venerable set of rules published in 1975 by TSR called Don't Give Up the Ship, put together by none other than Gary Gygax, Dave Arneson, and Mike Carr as the original D&D was being developed. The rules stand the test of time and the whole gang had a fun time - lots of laughter, few if any arguements, and loads of cannonballs in the air.
My wife, who introduced me to this game over 20 years ago, set the scenario of US Naval forces attempting to break the blockade of Baltimore harbour by the Royal Navy. The US ships were to hold off the Royal  Navy's units to let two cargo ships get off the table. There were also two pirate ships, the White Rose  and the Crimson Star, who came in to mess things up further.
The ships were from Beth's collection of 1/1200th models. Bear captained the USS Constitution (44+gun frigate), Darian the USS Essex (32 gun small frigate), and the USS Wasp (16 gun sloop of war) was my ship. Lain entered later with the USS United States (44+ gun large frigate). On the Royal side, Derek skippered the HMS Victory (100 gun ship of the line), Andy the frigate, HMS Lydia (yes, Hornblower's ship - 36 gun frigate), Martin (14 gun sloop) and Lance (44 gun frigate.) Robby had the pirates (Crimson Star and White Rose - both 26 gunners) while Beth commanded the freighters and controlled the shore batteries of Baltimore.

Robby and the pirates took one of the freighters and the Crown forces captured the other. Martin's ship sank. He and I seemed to have a duel for almost the entire game, but I can't take all the credit; he was getting battered from all sides. Our ships often got in the way of others, cutting off what might have been good broadsides. I think that was to be expected since only Beth and I had played the rules before (although Robby had a 'training game' the day before) and it'd been years since we played.
Our second game was a meeting engagement off the coast of Brittany, with almost the same sides. Martin exchanged his ship for a lighter privateer, represented by the White Rose. Robby added the Crimson Star to the US flotilla. This time I was sunk, but the Wasp gave as good as she got... almost.
I can't remember much of the second game since I was plotting my own moves and then moving for myself and another fellow. It got real busy out that afternoon.
﻿
﻿
﻿﻿
﻿ ﻿ ﻿﻿

A few notes:
Next week at the club: the Christmas party - Wings of War including Santa's sleigh, the Red Baron, and Snoopy. Also some other simple games to be played around the pastries and hot chocolate. In January and February, "Iron Ivan Boot Camp" about 5-6 weeks of WWII games using Disposable Heroes in order to get real familiar with the rules and the different armies. Both Eastern and Western front scenarios using Wehrmacht, SS, Russian, US, British, Canadian, and Sikh troops - line infantry, commandos, and paratroops. (Paint, Martin, paint!) Eventually we want to do a Dieppe scenario. Churchill tanks will be needed.
Looking forward to the Christmas-New Year's holiday. My children will be home and I'm taking some time off after Christmas, which is a very busy season for my profession. So I add this to guard your season: 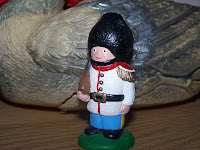 I've been slow to blog lately. This time of year does get busy for people in my line of work. Still... some worthwhile things have happened.
Two weeks ago, a group of us played a game using the Warhammer Ancient Battles rules - Early Imperial Romans vs. Gauls. There will be no report on this game since it didn't go so well for me. The reasons are immaterial, but the photos are worthwhile.


That's quite enough about that fiasco. Last week, we did an old favourite - the Tiger Hunt. Take Iron Ivan's "Disposable Heroes/Coffin for Seven Brothers" rules, give each player a Tiger tank (Pzkwgn VI) or a Panther tank (Pzkwgn V), and it's every man for himself. When we've done a mini-con of sorts, this always goes well. It also help us to drill ourselves on the armour rules in the rule set. It's always a scream. When your tank is knocked out, you go get another from the pool. (1-3 on a d6, a Tiger, 4-6 a Panther, until those models run out, then the Koenigstiger and Jagdpanther can appear. This time we added a few "Guests" like 2 Ferdinands, a Firefly, and a Churchill with a 75mm gun so it would have a fighting chance. We actually played two games. In Game 2, all players got a Tiger and it "respawned" as a Panther, but there wasn't a third chance.


This week, the club was playing a Dreadnought-era naval game, but I could not make it due to vehicle troubles. I'll try next time. Our next scheduled game is one of the Age of Sail, an old nugget called "Don't Give Up the Ship." One of the authors was the late Gary Gygax, done prior to his D&D publication. Before Christmas, we'll do our now-traditional (as in "We've done it once") Wings of War game with Snoopy leading the Allied squadrons.


More on that later,
Posted by Grenzer John at 14:58 No comments:

To any of my blog readers:

This YouTube video was recommended to me by a friend. I found it truly amazing with model work beyond almost anything I'd ever seen.

So, of course, I'm "stealing" the link and sharing it with you.

http://www.youtube.com/watch?annotation_id=annotation_785740&feature=iv&v=Qz4NcTnQedo&src_vid=4_06qrFnvnw
Posted by Grenzer John at 20:22 No comments:

Blue and Grey at Crouch Library

This past Saturday, part of the Hamilton Road Gaming Group played an American Civil War scenario using a variation on Iron Ivan Games' "This Very Ground." Andy and I cooked up this variant, which is based on Iron Ivan's French & Indian War rules. The weapons' ranges, some of the morale specifics, and a few other idiosyncratic points required a "home brew" solution. The game works is all I can say.

Andy and I ran the Union troops - Two 4-section companies and a cannon each, while Wayne and Bear pushed the Confederates, with roughly the same set up. Bear and I both replaces one 11-12 man section with a 5 figure section of sharpshooters with sharpshooter rifles. Both proved their worth. This was also our first use of artillery for the game - 12-pounder Napoleons for everybody!

Some photos to tell the story:
﻿
﻿


As our games often do (because of time constaints), the game ended in a draw. The Yanks took serious casualties crossing the fields while the Union guns did serious execution on the exposed Reb infantry. The Rebel guns did knock out one of the Union guns; so much for avoiding counter-battery tactics! We never got to hand-to-hand fighting, and so were not able to use the "Skidaddle" section of the home-brewed rules.
A few notes: