From time to time, events take place and things happen. If it's tragic or unsettling, I find there's no sense in me posting, although most of you, my esteemed readers, would respond with support and sympathy. If it's fun, I find there's no reason to keep it to myself.

Can you hear the dump truck backing up here? 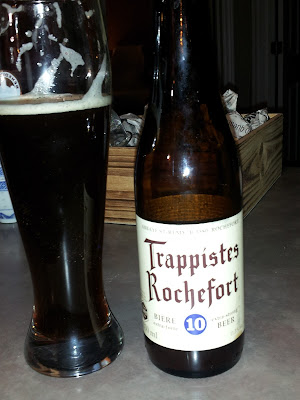 My wife and I went to the LCBO (Liquor Control Board of Ontario) store and she bought me this bottle of beer. I was brewed by Trappist monks in Belgium and I'd be willing to bet that the recipe is either the original one or is based on it. I found the flavour to be very, very deep and satisfying. I'd never tasted anything like it before. I also hope I'll taste it again. Not cheap, but very nice.

At our monthly Lutheran pastor's meeting for the Thames Ministerial Area, this little guy showed up. Actually, two of them did. It's a Playmobil Martin Luther, marketed for the upcoming 500th anniversary of the Reformation. A pastor had been in Germany (I think) and brought back a number of these figures. It was cool to have this little guy present during our conversation... and with us at the Mexican restaurant where we had lunch.

I'm out of time right now, but there are gaming and reenacting events I'll be blogging about soon.

This past Saturday at the Hamilton Road Games Group, we tried out a new (to us) set of WWII rules called Panzer War. Martin and Kevin have been eager to try out the rules so we set up a game set in North Africa after the Torch landings, with US armour and infantry doing a fighting withdrawal in the face of the Afrika Korps in the battle of Kasserine Pass. I skippered the US forces while Bear ran the Germans. Martin and Kevin handled the rules, a good idea since they were the only ones familiar with the rules. Andy supplied a lot of the German vehicles and Martin brought most of the US stuff with a small contribution from my collection.

The rules called for an initiative roll and Bear moved his Pz. IIIs and IVs forward, holding back his truck-bourne infantry on Andy's advice. One platoon of infantry went into the houses in the first town. In my turn, I mortared those troops and took out their command stand. The 37mm guns of the Lees' turrets disabled two of the five Pz. IVs while the one 75mm main gun that could be brought to bear merely kicked up some sand. Since we were unfamiliar with the rules, shooting took quite a while. (Visibility? Targeting? Range? To hit? What area on the vehicle? Penetrate? Damage? On fire? Tank commander kill? Stun? Bail out?) Bear's return fire on the second turn took out ALL of the Lees. ("Coffin for seven brothers" indeed.) I was able to slow down this advance but not for long. Bear had to leave in the mid-afternoon for an appointment so the game only when two turns. Looking back, I should have begun a withdrawal really early.

As Bear had to leave early and had cut up my defending force badly, we declared him the winner and I agreed I should have started a withdrawal earlier, although I suppose I was playing a delaying force while the main force made a run for it.

In all honesty, I found the rules "clunky", with 8 pages of charts and variables that you had to access for just about every shot. I agree with Kevin who felt this game allows for more realistic results in armoured combat. I just felt that it could become an exercise in calculation, accounting, and hair-splitting since a long check-list might be needed to adjudicate every turn. Realistic, no doubt. Playable? I have reservations. I studied business and economics in university and economics is not called "the Dismal Science" without reason. Ultimately, in my dotage, I think I prefer simpler, quicker games. As always, it was worth a try. The vehicles looked good!

Epic!
Who plays that anymore? Well, me... and Martin... at least on Saturday.

The "Epic" version of Warhammer 40K was one of Games Workshop's best games, in my opinion. For whatever obscure/obtuse business reasons, GW discontinued the game or sent it down to the minor leagues, along with some of their other great games, like Warmaster and Man-of-War. Before my move to Canada, my buddies and I played Epic a lot and we had most of the usual armies covered - Space Marines, Imperial Guard, Eldar, Squats, Orks, and Tyranids. I have a Tyranid army but I feel I should shower whenever I touch it. We had a few great games. Then GW changed the rules and I found the game unplayable. (Again personal opinion.)

A while ago, Kevin, one of the Panjandrums of the Hamilton Road Gaming Group, told me of the Net Epic discussion group on-line. The rules seemed to be a slight variation of what I considered the classic Epic rules. The usual armies were available, but they added a few others - including the Ecclesarchy (The Church of the Emprie), Slann, "Evil creatures" (somewhat weird, I think), and Tau. Oh, Tau! I've been converting and dummying them up.

Finally, Martin and I agreed to try the rules. We laid out small forces - Dark Angel Space Marines vs. an Imperial Guard force. The Marines were outnumbered but were of much better quality. The IG was wave upon wave of expendable infantry with heavy armour support and loads of artillery. We weren't sure how the game would be, but it ended up to be a real nail-biter of a see-saw battle - quite satisfying all around. (Martin grasps rules very quickly and we're both quite amiable at the table, so we have fun.

The objectives included a small town and a large power-plant. The Guard was to hold both and the Marines were to take both. Simple goals for a simple game. (Martin and I took the photos.)


Martin attacked and noted that because of the size of the forces, he should have defended. He kept up that chant until he saw how easily my troops were taken out. The Imperial Guard infantry have no saving throw! Neither of us could throw good dice for the entire game. Martin sent the Dark Angels infantry (two sections) toward the power plant, supported by three sections of Land Speeders and four Dreadnoughts. Another Marine tactical section, a section of Terminators, and a section of Assault Marines in Razorback APCs headed for the town backed by bikers, heavy weapons, and a battery of Whirlwind missile launchers. I had a heavy weapons section in the town and another in the power plant. Two companies of tactical infantry were in support, one to each heavy weapons section. A third company took the far right flank with a Baneblade super-heavy tank in support, to preclude a Land Speeder end run. In the centre, an entire company of Leman Russ tanks were set to move forward. Three artillery batteries - Whirlwinds, Basilisk cannons, and big rocket launchers - supported the entire force. Three helicopter gunships ("Death Pigeons") and bomber planes ("Vultures") could come on to support as well.

Martin's advance came on quick and hurt my heavy weapons sections. His Razorbacks smashed my Rough Rider cavalry and cut up an armoured infantry detachment. I was able to hurt the Space Marines that were advancing toward the power plant, taking out about half of them before they could dismount from the APCs. His Land Speeders actually destroyed the Baneblade super-heavy tank and wiped out the heavy weapons section in the power plant, using their Flamers which ignore cover. When my Leman Russ tanks came up, they really damaged the advancing Space Marines and the Terminators' Land Raiders, although those big tanks gave as good as they got. The Space Marine advance supported by the Dreadnoughts finally took the power plant, and I was sure I'd never dig them out of that place. Just for a trial run, I brought up a company of infantry and after shooting for two turns, I charged the place... and re-took it! Not without losses, however.


By the end of our time, I had lost and retaken the power plant. Martin had troops in the town and was grinding up my infantry there. My bombers and helicopter gun ships were doing damage and had taken losses from AA fire. The Dreadnoughts had been firing on the rear of the Leman Russ tanks and had done plenty of damage to the company, about two platoons worth. The bombers and the artillery finally did them in.

In the end we called it a "bloody draw", which I don't consider a bad thing, since I hadn't played there rules before and the figures hadn't seen the light of day in almost 10 years. I left both of us with an appetite to play again, and do do micro-armour moderns.

As to the name of my power plant, you can find it here in an MST3K rif.
Next week - Casserine Pass in 15mm.
Posted by Grenzer John at 17:08 2 comments: