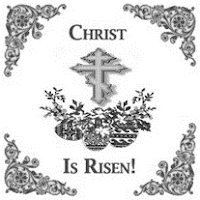 I'm more than a bit late in blogging this, but it has been a busy, busy time. Between Thursday, March 24 and Sunday, March 27, I was involved in 5 worship services (including one in the German language) and preached at four of them (although not the German one.) Monday was a day off for me, but I was struck with insomnia on Easter Sunday night which did not help at all. My wife has been incredibly kind, cooking some favourite meals for me, all while suffering some eating problems herself. My daughter took us out for sushi for lunch yesterday and it was delightful!

In any event, I'm adding one of my favourite Easter hymns as a celebration. The poetry is quite old, dating from the 8th Century of the Christian era. It says all I'd wish to say for the festival.

’Tis the spring of souls today; Christ has burst His prison,
And from three days’ sleep in death as a sun hath risen;
All the winter of our sins, long and dark, is flying
From His light, to Whom we give laud and praise undying.

Now the queen of seasons, bright with the day of splendor,
With the royal feast of feasts, comes its joy to render;
Comes to glad Jerusalem, who with true affection
Welcomes in unwearied strains Jesus’ resurrection.

Neither might the gates of death, nor the tomb’s dark portal,
Nor the watchers, nor the seal hold Thee as a mortal;
But today amidst the twelve Thou didst stand, bestowing
That Thy peace which evermore passeth human knowing.

“Alleluia!” now we cry to our King immortal,
Who, triumphant, burst the bars of the tomb’s dark portal;
“Alleluia!” with the Son, God the Father praising,
“Alleluia!” yet again to the Spirit raising.

Email ThisBlogThis!Share to TwitterShare to FacebookShare to Pinterest
Labels: Easter

... And saved the sum of things for pay.

After the ACW bash-up I just blogged about, the next week saw Martin L and I playing Pike & Shotte with our Thirty-Years War armies - French vs. Swedes. In the real world, the French bank-rolled the Swedes late in the TYW, but we like our armies too much to be held back by reality.

I had two brigades of infantry, one native Swedes, guards and veterans all, and a second of German/Scots mercenaries. I made sure I had plenty of artillery, lots of light guns to back the infantry. Two cavalry brigades rounded out the force - cuirassiers, harquibusiers, Swedish light horse (stripped down cuirassiers in reality) and Finnish Hackapelli. Martin fielded a similar force but most of his horse were heavier than mine and his infantry was a match for mine with salvo fire and fielded as large units.


At the end of things, Martin actually conceded the field. Being a gentleman, I permitted him the honours of war and let him march off with flags flying.

Two weeks of winning! I'm not sure I can deal with this. Of course, the next week, I had the stomach flu. Go figure.


At another table, Wayne and Kevin were play-testing a game for the up-coming Hot Lead convention.


An interesting day all around.
Posted by Grenzer John at 18:36 2 comments:

A LARGE Game and a good one.

I've been out of circulation for a bit, dealing with three things - the stomach flu, a serious head cold, and the season of Lent. As a pastor, it gets quite busy. If you add illness to the mix, it doesn't get any better. So I've had little time and less energy to blog. Because of that I'm "behind" in battle reports.

About three weeks ago, we played a huge game of American Civil War using the Black Powder rules. I find these rules to be quite playable for the period and I'm looking forward to Warlord Games ACW supplement, which the rumour mill reports is coming out before long. Warlord's website has been teasing us with hints of the internal art work. Well, I know I'm going to buy it when it come available.

The game had eight players. I actually ended up on the Federal/Union side along with Martin L., Ralph (who supplied all the figures and the bulk of the terrain) and Graeme. The Confederate side was run by Martin J. (of J&M Miniatures), Jakob, Barnaby, and Bear (who got to push his beloved Rebels on the table.) I had the far left flank of the Union army with a three regiment infantry brigade supported by a cavalry regiment and a unit of skirmishers/pickets. I faced Martin J. who had a similar force with maybe an extra infantry regiment.

I should mention that two other games were going on at the same time. A game of Napoleon at War was held in one corner and another corner saw a game of Muskets & Tomahawks for F&I. It was a very busy day and the library likes it that way. It helps with their numbers... and funding.


I'll be honest. The game was hard fought. Martin L.'s troops were hammered by Jakob until they broke. Ralph didn't fare much better. Graeme held on in the face of Bear's aggressive moves. The oddest thing about the game was that I won my end of it. My cavalry defeated Martin J.'s and my infantry eventually came to hand-to-hand with his and beat him! I actually felt bad! I'm used to losing so actually winning was a new thing to me. I hope to get used to it.

A few more random photos to round out this blog entry.