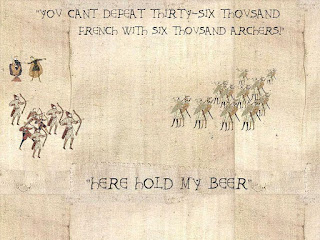 The Hamilton Road Games Group meets Saturdays at the Crouch Branch Library on Hamilton Road (Amazing!) in London, ON. All sort of games are played. This past Saturday GasLands, a post-apocalyptic car battle game and Rebels and Patriots, a skirmish game originally meant for gaming the American War of Independence but used for the American Civil War that day. Both of those games are from Osprey. A few of us played Kings of War, a large unit fantasy wargame from Mantic Games. Since GW's Warhammer became a skirmish games with a new set of larger figures, huge armies lie languishing and unused in basements, closets, garages, and sheds. Now... they can be used. (The picture above has NOTHING do to with KoW; I just thought it was cool. The photos used in this blog are courtesy of  Rich, who played Rebels and Patriots, and myself... who took all the lousy photos.)

Andy and I played on one table - his Salamanders vs. my Kings of Men Renaissance-type army. (Okay, they were WHFB Empire troops with some additions.) Tyler (more Salamanders) took on Ralph's Force of Nature army. Lots of lizards there. (Tyler and my daughter, who fields elves, have a constant grudge match going on, so I was not permitted - by plebiscite - to take on Tyler, who had to leave by lunch time anyway.)

Andy and I called it at lunch time. His dice were not cooperating in any way shape or form. However he did wipe out my giant and my knights in short order.

Following lunch, Ralph and I fought it out.

Ralph courteously threw in the towel when my giant ran amok all over the table and finally faced his Tree Herder along with the Captain and the Army Standard bearer - and still couldn't beat 'em! I'm getting the real feeling that no army in this game is a pushover!

Other painting... the ballistae seen below were painted for my wife's Basilian force. She loves the Arthurian legends and is basing her army on them. Why not?

Dredging old boxes my son left behind when he moved, I found this Mech. I thought it could be used by his Dwarven army as a "Juggernaut" suit, a steam-powered suit of power armour with a hand cannon. He liked it when he saw it. It has since been flocked.

I have a few ideas for some upcoming games that I'll work out later... after Hot Lead and the upcoming WWII Pacific "Battlefront" battle between the Japanese and the Dutch. Should be interesting!
Posted by Grenzer John at 09:59 6 comments: