I wish I could say I painted all of these figures during the "social distancing" time here in Ontario, but that'd be a lie. It's all been part of a project to  co some completion of my Napoleonics troops for Artie Conliffe's Shako, my favourite set of rules for the Napoleonic Wars. Most of the infantry units are set for nine figures and that makes them look a bit anemic. So I decided to try doubling the size to eighteen and putting them on a base with a designation on the back, in order to tell one unit from another by sight... rather than putting the name on the bottom of the stand or depending on facing colours to tell one unit from another. What I have here is the bulk of my work after finishing my wife's Italian army. I continued with my French allies, the Confederation of the Rhine, and the Kingdom of Sweden. Now I'll go on to the Russians, Prussians, and finally the Austrian - my favourite army. The Turks and the British will wait a bit.

I haven't listed the manufacturers of the figures since I have been mixing various figures in a unit. Right now, I'm reaching back into figures bought or received long ago to fill out units.
Posted by Grenzer John at 13:40 6 comments: 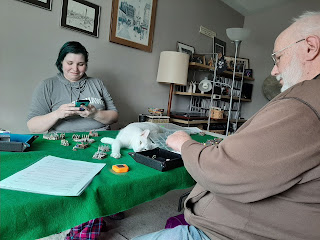 Hot Lead, the premier gaming convention of Southwest Ontario, has been cancelled due to the present COVID-19 situation. It was the right thing to do and I compliment James on his decision, which came before the provincial mandate to suspend most group/crowd activities. Beth and I were going to go so we were disappointed even while fully supporting the decision. NEXT YEAR IN STRATFORD!
With that in mind, my daughter challenged me to a game of Kings of War using our 10mm WarMaster figures. We've done this before, especially since Katie's 25mm Elf army is still in the process of being painted. We used the second version of the rules since we're not yet familiar with the third. For the game, we use centimeters in place of inches. It works for us. So on Sunday, we hit the table.
We rolled for terrain and all the rolls were negative - no hills, no trees, no rivers - so it was some meadow somewhere in the world of fantasy. The Elves fielded lots and lots of bow-armed troops, both horse and foot, and a bunch of spear-armed infantry with one bolt thrower, some chariots, a mage, and a general. My Kings of Men army had two "hordes" of pikes , one of halbreds, a horde of berserkers, a horde of knights, some troops (smallest units) of mounted scouts and arquibusiers, two siege guns (which are really howitzers), a mage, the Captain, and my giant, Tiny.


I won the toss and made Katie move first. We were both out of range of each other except for my howitzers, who were not effective in general. I made the mistake - one I almost always make - of not being aggressive against a missile-heavy army. (If you spend less time in the rain, you don't get as wet... as it were.) She hacked up my berserkers early and our smaller units paid the price of being on the field. Tiny fought two units of Elven cavalry, destroying the first and being destroyed by the second. The Black Company and the two pike blocks suffered from missile weapons, but soldiered on. My knights exchanged charge and counter-charge with Katie's long spears until some flanking units hit them.
In the end I conceded the game since all I had left was the knights, the artillery, and some odd-ball stuff. I often loose to Katie and to my son, Robb and his dwarves, as well, but playing the game is fun, no matter what the out-come... although winning once in a while is nice.

Then a guest arrived. Katie's junior cat, Maeve, jumped up on the table at the end of the game and sat down on a unit of Elven bows. I suppose we were not paying enough attention to the death kitty. So she took matters into her own hands. (Paws?)


For those interested in playing in 10mm, I recommend the ranges from Pendrakon - ancients, Medievals, SYW, ECW, 30YW, and fantasy. There's more than enough there. Also, Napoleonics, WWI & WWII, moderns, sci-fi. I recommend them almost anything you'd want to do up for a 10mm KoW army... including tanks! (Look under WWI or the Interwar/Spanish Civil War for some weird rolling stock.)

All in all not a bad way to spend a "social distance" Sunday afternoon!
Posted by Grenzer John at 08:59 2 comments: