Life in the Talbot Settlement - part 2 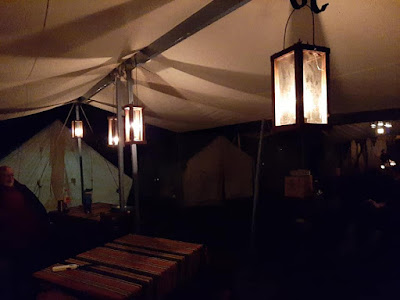 Lots of photos, so I need a second blog to handle it all.

I didn't touch on the War of 1812 part in the first one, but this one will be almost all 1812! Although Backus Page house was not built until the 1850's, it is used to demonstrate the sort of raids that were done all along the coast of Lake Erie in 1814 and as part of MacArthur's raid in the Fall of 1814. 500 mounted volunteers from Kentucky and Ohio left Detroit and moved through southwestern Ontario to the Grand River at Malcolm's Mill. The column defeated the assembled Canadian militia there, but found themselves almost surrounded by militia and regular British Light Dragoons. So they turned back to Detroit, following the trail that is now Highway 3 in Ontario.

The house raid was the big noise of the event for the War of 1812 reenactors. They portrayed American, Canadian, British, and First Nations fighters. The raider were looking to arrest Colonel Thomas Talbot, the leader of the local community. (They almost got him three times, but he escaped each time.) Rather than burning the house, the "raiders" took some items of symbolic value. A firefight began; the US troops sustained a casualty (Alex every time), and finally withdrew. On Sunday afternoon, I was "captured" as the American commander. It was a load of fun.

(The sources of the photos were noted in the previous blog entry. I continue to thank them.)

And now for the Academy Award for Best Wound and Death for a Young Ham... Alex!


After every raid, we saluted the audience. After the final raid, we presented Angela and Beth for much-deserved applause by everyone there.

Posted by Grenzer John at 13:36 No comments:

Email ThisBlogThis!Share to TwitterShare to FacebookShare to Pinterest
Labels: Backus-Page House, raid on the house, time-line event, War of 1812

Life in the Talbot Settlement (1)

On the weekend of September 26-27, The Backus Page House Museum in Wallacetown, ON hosted a historical event - the "Life in the Talbot Settlement" timeline. This may have been the only full reenactment in Ontario this year. Just about every possible precaution was arranged to prevent an spread of the pandemic virus, including social distancing, masking, hand cleaning, and COVID-19 tracing information. The number of guests was limited to 50 each half-day period.

For example, Saturday morning, the gates opened at 10:00am. At 11:00, an equestrian display by the WWI reenactors took place. At 11:30, a display of 1812-era cannon fire, of an American Civil War volley gun (although it did not take place Saturday morning), and a Spanish Civil War machine gun (all done by compressed air) took place. At 12:00 noon, a "raid" on the house by War of 1812 reenactors took place. At 1:00pm, the first batch of guests was to be gone and a second batch came in. The afternoon's activities mirrored the morning's.

Reenactors were present for the American Civil War (55,000 Canadians volunteered in various units during that conflict), the War of 1812, WWI, the Spanish Civil War (the Mackenzie-Papineau Battalion of the International Brigades), and WWII. All the assembled reenactors reflected a portion of Canada's military history. A small number of units withdrew prior to the event because of health concerns, especially since they were coming from areas with a much higher infection rate than our Elgin County.

Now the photos, which say more than my words. (My thanks to Laughing Devil Photography, Steve Zronik, Beth Goldsworthy, Rob McGuire, and Kylee Lanigan for the kind permission to use their photos.)


If I seem to have spent a lot of time and ink talking about the Mac-Paps, it is because I find the unit interesting. SCW reenactors are very few and far between. This is a period of history that is almost unknown to many and their fight is worth a remembering. The Spanish Civil War was an exceptionally brutal conflict, pitting Fascists/Nationalists assisted by Nazi Germany and Fascist Italy against the Left-wing Republicans who were supported by the Soviet Union. Men from all over the world went to Spain to volunteer for the Republic's forces. Some volunteered for the Nationalist side but it was less so. Orwell's Homage to Catalonia and Hemingway's For Whom the Bell Tolls are both written about the Spanish Civil War, Hemingway's a novel and Orwell's a first person account.
This is getting lengthy, so I'll continue with a second blog shortly.