Double dose of Kings of War 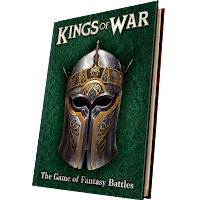 From previous blog entries, you may know that I'm a fan of Mantic Games' Kings of War. I've found it to be playable and enjoyable. Rumour Control reports that Mantic is eating GW's lunch, hence the return of Warhammer Fantasy Battles under some pseudonym with the old 20mm square bases. Of course, that's a rumour; I don't know about such things.

Anyway...
My daughter, Katie, challenged me to a game on my birthday and we played with the 10mm Warmaster collection the family has. (Yes, I'm quite ancient now, having turned 65 a week before I write this.) Katie's Elves met my Kings of Men army on the kitchen table while dinner was cooking. It was a solid win for the Elves and we both enjoyed ourselves. (I took these photos.)

Yesterday (Saturday), my friend Mark came down from Brantford with his friend Chase to play KoW at the Hamilton Road Games Group in London. Mark has three very young boys and can't get down to London to play very often, so we set up this games day to accommodate him and ourselves. As it was, Mark brought his dwarves, my son, Robb, brought his dwarves, Chase brought his goblins, and Bear and I each brought our Kings of Men armies. Matt assisted Bear since he wanted to play and learn the rules, but had no army of his own. Kevin did the play-by-play and colour commentary.

Robb and Chase played on one table and the dwarves beat the goblins in a tough match. No photographic evidence was forthcoming but... trust me; I was there.

Bear and I got a late start and we too had a tough match. I usually go with my pikes while Bear uses larger cavalry units and infantry with less long, pointy things. He beat me but it was not altogether easy. (Chase and I took the photos. He's responsible for the good ones!)

Meanwhile on the other end of the double table, Robb and Mark fought a dwarvish Civil War, one I'm sure the bards will sing of for... maybe a week or two. Lots of beards, steel behemoths, ogres, and swearing in Kudzul. Robb conceded the game but every dwarf will remember it; grudges run deep in the Stone Folk!

I do enjoy the game and I'll get better at it. It allows me to use figures that I hadn't touched for years... and they're all painted!

All for now. I'll soon be moving to a more part-time ministry so there *might* be more time for blogging. See you down the road!
Posted by Grenzer John at 13:25 2 comments: