The answer was "Nuts!"

We've had a good deal of snow and cold weather here in Southwestern Ontario of late. Not on the scale of Buffalo, NY, true, but it was cold enough on Friday night to freeze my trombone slide when the band I play in played Christmas carols at the Aylmer Tree Lighting on Friday evening. In keeping with that cold weather theme, a few of us gathered at the Hamilton Road Gaming Group to play a Disposable Heroes scenario set in what became known as the Battle of the Bulge. Andy laid out the table and served as games-master and general adviser. Bear and Derek ran the German force of mostly motorised Volksgrenadiers with some armour with the objective of taking the crossroads seen in the photo below while I took the role of defender with a platoon of American GI's provided with some extra oomph by bazooka teams and two Shermans (a Sherman 75 and a Sherman 76.) I was dug in along a tree line with my two tanks arriving/activating a turn or two later. Andy cut some brown felt to designate foxholes and weapons pits. He and I took all of the photos.

The game started with two of my squads dug in along the tree line on my end of the board and a third squad thrown forward into the wood on my left. A medium mortar was set up at the rear of my area. It fired every turn and hit absolutely NOTHING! Nada! Nichts! Nitchevo! The platoon command had an M3 halftrack and the two Shermans would activate when the German armour arrived. I also had an HMG team and two bazooka teams added to my crew. The Germans had about 5-6 squads with 2 mortars, an HMG, and a 75mm anti-tank gun as well as two Tiger I tanks, but they arrived piecemeal. Two squads and a recon patrol were on the board at the start of the game. DH hold in-wood visibility to 10", but we increased it to 12" since the woods' foliage was gone due to the winter. Not a big difference all told. Bear advanced cautiously on the German right and Derek came forward on the left. (Those are his troops in the photo above, the recon section on the left and a two section Volksgrenadier squad on the right.) The command sections arrived right off in Kubelwagens and a captured Jeep. My squad in the woods drew first blood by firing on Bear's troops, the BAR taking down one soldier.


Derek and Bear's troops arrived a truckload a turn with a Tiger arriving on turn #2. My Shermans moved forward as well and began to exchange fire. The Tiger missed me and I bounced a few shots off the armour of the Teutonic behemoth.

As Bear and I exchanged fire in the woods, I lost men; his shooting was better than mine. So I fell back slowly until the remnants of the squad broke and ran. Bear moved up almost two squads to the edge of the woods by the time of curfew, but the never engaged my dug in infantry. (We gave foxholes a "medium cover" factor, but that turned out to be too little. On the other side of the road, I lost ¾ of a section and a bazooka team to the German HMG despite the foxholes.)


The Germans were unable to achieve their objective of taking the crossroads in the allotted time. Most of my dug-in squads and Bazooka crews were not engaged since my one squad in the woods slowed up the Volksgrenadiers' advance. My HMG would have done better service if I had moved it to the other side of the road, although it might have fallen victim to that crack MG42 Bear was pushing around. It wasn't a bad game and it was a good way to spend a rainy, dreary Saturday afternoon.


At the other table, Wayne and Kevin were working through a WWI trench scenario. Wayne has been fine-tuning this scenario for a while. I think he intends to use it at a convention.


Next week, we hope to do American Civil War in 15mm using Warlord Games' Black Powder rules. I've been itching to try this and Bear dearly loves the period. (When playing it, he changes his name to Beauregard. Two guesses which side he prefers; first guess doesn't count.) In December, it'll be time for our annual Christmas Party and Flying Circus which means hot chocolate and marshmallows, Snoopy and the Red Baron, and Santa flying a supply mission. This year, we add an Italian bomber!
Posted by Grenzer John at 13:12 2 comments: 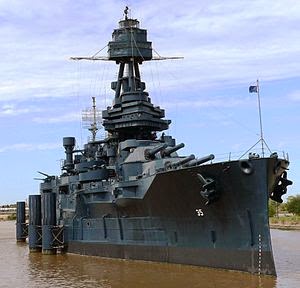 Since I'm blogging on a naval wargame, I thought I'd preface the thing with a photo of the only battleship I've ever been on - the USS Texas, which is in permanent dry dock (sunk in concrete actually) on the Buffalo Bayou in Houston, TX. My wife, Beth, knows infinitely more about navy stuff than I and we visited the ship when we lived in Houston. It's well worth seeing. Note how dark the ship is painted.

In any event, last Saturday at the Hamilton Road Gaming Group, we played Naval Thunder using World War I ships. Kevin fell into a treasure trove of ships with a model shop liquidating their stock of 1/8000th ships. Andy was quite busy painting the ships for both the British Royal Navy and the Imperial German High Seas Fleet. So Andy, Martin, Stu, and I each took a squadron of battleships and duked it out. (To be fair and honest, Andy had a battle cruiser as well.) I took some of the photos and Andy took the rest.


I don't remember the names of all the ships, but my squadron consisted of HMS Iron Duke, HMS Erin, HMS Canada, and HMS Agincourt, all battleships of different classes. Andy had 4 battleships and a battle cruiser. Martin and Stu had 4 battleships each, if I recall correctly. We approached each other in two parallel lines. Since long range for our guns was 42 inches, we moved a while before we fired at each other.


As we approached each other, Andy exchanged fire with both Stu and Martin's squadrons. I was further back and coming into line of battle with Andy's squadron, so I held my fire. Naval Thunder uses a fairly simple d10 system for firing, differentiated by range, gun weight, and ship armour. You roll a d10 for each tube firing, usually needing a 7+ for medium range and a 9+ for long range. If your target is receiving fire from a second ship, you need one better on your role. If you achieve a hit, you roll again against the target's armour. Roll lower than the armour factor, half damage. Higher, full damage and a critical hit roll. Rolling 2 d10 and checking a table, this could result in flooding, a damaged rudder (maybe no turning) or boiler (reduced speed), a hit on a primary or secondary battery or torpedo tubes. A hit on the bridge can really hurt, but a full blown total of 20 on 2d10 means a hit on the magazine and an instant and catastrophic explosion resulting in an instant sinking. The accumulated damage from hits is rated against your hull factor and once that reaches zero, you're sunk as well.

After exchanging some fire, the German fleet turned 180° and began to run parallel to the British fleet. At this point, one of Andy's salvos hit the magazine of one of Stu's battleships, giving us a wonderful example of fireworks on the high seas.


With the sinking of one of Andy's battlewagons, we decided both fleets had had enough and would head for home and refitting. One of Martin's ship was down to 3 points of hull left! Another salvo would have sunk her. My ships were in relatively good shape - some hull damage, one lost primary turret, a few secondary turrets (used mostly to take out destroyers and torpedo boats making torpedo runs. If you get close enough to use your secondaries on capital ships, you're probably too close!)

I enjoyed the game even though I am not a big fan of naval wargames. Naval Thunder is quite playable and you can get a satisfactory game in in less than an afternoon. With 1/8000th scale ships the gun ranges seem realistic, although I know they could be as much as three times more than they are. This would require an empty hall to play on the floor... and I've come to enjoy chairs! I don't think I'll be investing my money in naval squadrons; it's just not my style. I will play the game when it comes up. As for my resident naval expert... well, Beth prefers Age of Sail.


Enough for today. We'll be on land next week. Soon we'll have our Christmas party with Wings of War with Santa, Snoopy, and the Red Baron and other friends. I requested that we try Black Powder for an ACW game in 15mm. I also asked to try a real blast from the past - 40K Epic using WebEpic rules, which are a throw-back... and playable. I want to try my helicoptor-borne Imperial Guard units. There will also be a swap-meet late in January. Something to look forward to as the after-holiday blues set in.
Posted by Grenzer John at 10:49 8 comments: