Latest Off the Painting Table 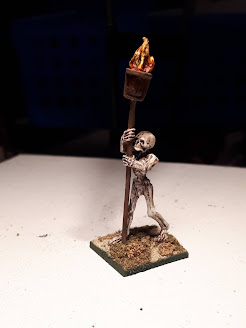 Despite the seeming inactivity forced upon me by the COVID-19 virus and the lockdown/continued aftermath, I have been painting... some. Not as much as I'd like some times but some.
First, I received the Four Horsemen of the Apocalypse from Skull & Crown Miniatures. They are excellent castings and really catch the gist of the subject. I'm not much for "undead" but the quartet of Revelation inspired riders were worth while.


Gruesome figures to be sure, but a great addition to my collection. I received these a while ago and they'd been sitting patiently awaiting paint and brush... and there were lots of others with them.

Through a purchase from the Hamilton Tabletop Gaming group's "cyber bring 'n'buy", I got a hold of a few of Bob Murch's great Pulp Miniatures. There's so much character in these figs. I think these are from his set called "Femme Fatales."

Finally a paper model. I had done one of these as a WWI German A7V tank in 20mm and I thought that if I did up another one, it might be fine as some Epic Warhammer 40K Imperial behemoth tank. This one didn't go together as easily as the first one, but I'm satisfied. The pieces were inexpensive since I printed them on my computer on card stock. The "treads" were some abandoned balsa wood since the printed treads were very, very fiddly. It's not the best I've ever done but it'll do... and I could make another very quickly. My usual Epic 40K opponent may have something more to add to his Imperial Guard army, while I'll field my Tau equipment. I hope I can report on that in the coming months.

Thanks for reading! Have fun... 'cause if it's not fun doing this, you might as well work! 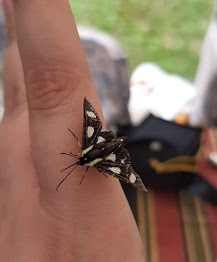 One of the upshots of the COVID-19 virus and the necessary precautions was the cancellation of all reenacting events in Ontario and just about everywhere else in the western hemisphere.
Except for one...
On Civic Holiday, the Backus Page House Museum scheduled a "Teddy Bear Picnic." (This was August 3 in Ontario - It really celebrates nothing in particular although some municipalities call it something, like "Simcoe Day" in Toronto; it's really an excuse to have a three-day weekend in August so each month of the summer has a three-day weekend!) St. Peter's Anglican Church is just down the road and had scheduled a day to celebrate or at least remember Colonel Thomas Talbot, a local leader in colonial times who arranged and distributed land to those he deemed worthy. More on that another time. The pandemic crashed the plans and Bishop Thownsend of the Anglican Diocese of Huron closed the churches of the diocese for any public event. Canon Nick Wells, the pastor and a member of our reenacting group, worked with the museum staff and the local health authorities to combine the events... and it was fun.
Croghan's Company of Reenactors (reenacting Captain Croghan's company of the 17th Infantry, United States Army in the War of 1812) set up a display and did some musketry demonstrations while families ate their lunches amid a mass of teddy bears. They brought their own picnic baskets and their own teddy bears. One family brought a huge laundry basket of bears!
Here's a gallery of images from the day:


Not a reenactment per se, but it was a display with proper social distancing maintained. We kept 6 feet/2 metres from the public and from each other. (Families excepted) Masks were available for all. We got to wear our funny clothes and fire a few rounds. As hot as it was, it was a good day.


If all goes well and the health situation remains stable in our area, we'll be part of a Canadian history/heritage time line in later September. More on that later.