My previous entry dealt with last week's game (18 February), so this one reports on today's game. The Hamilton Road Library needs our usual room for a large group meeting, so we went to a smaller room, but still had about 20 gamers stop by.
My crowd played an 1812 patrol adventure game using Iron Ivan's This Very Ground rules with a few variations for the War of 1812. Each player gets a patrol and a mission. Who wins depends on who fulfills their mission. The cast included:
Tyler - Native Warband with a British Indian Department adviser and help - arrive and leave by canoe and take scalps
DJ - Glengarry Light Infantry Fencibles patrol - burn a rebel's farm.
Kevin - British Regular infantry detachment - take and hold a crossroads
Robby - US regular Rifle patrol - find and recover a lost ammunition waggon
Andy - US Volunteer Rifle unit - burn a loyalist's farm
Martin - French Infantrie d'Ligne detachment - find and recover a lost cannon
Darian - US State Militia patrol - take and hold a crossroads
The order of movement was determined by drawing a card; when your card came up, it was your turn to be active. All units started roughly 12" from their table edge, going the long way. All over the board were numbered poker chips, each denoting an "encounter" of some sort or other. (An idea stolen from Iron Ivan's Where Heroes Dare pulp era rules.) Some of those will come out later.
As the game began, everyone moved forward, the US side all conferring. The units could not communicate unless an officer or sergeant was in base contact with another unit. The Crown troop didn't, but they didn't seem to care.

It appears the Crown won. Nobody fully achieved their mission, but the Glengarries carried off LOADS of edibles and the Natives burned and scalped their way across the table. (The US Militia sank all their canoes; seem birch bark won't hold up to bayonets!) The bridge became a stalemate with Kevin and Marty contesting it and being shot down each in their turn. The two US units of rifle armed troops were  invaluable.

In retrospect, I should have had more than one way to cross the river. The barge/ferry didn't work well and was disabled early. Some of my missions were unachievable which is distressing for the players, everybody then goes and has fun... which is why we play, isn't it?

Some of the encounters included a bear, a pack of wolves, a moose, a nest of snakes, a skunk (which Andy simply walked around), the "witch" and the witch-hunters, a hen house with hens and eggs, a smokehouse with hams, bacon, and smoked fish, a cache of highly flammable lamp oil which no one found, a cart loaded with moonshine, refugees and their carts, a bog, the barge/ferry, and cattle. It may be a while 'til we do one of these again, but all the players seemed to enjoy the game.

Last of the Boot Camp

Illness prevented me from blogging before this. The beginning of Lent is a bad time for a person of my profession to come up ill... it is entirely too busy! So here are some offerings for you.

The Hamilton Road Gaming Group finished up our "Disposable Heroes" Boot Camp with a few games. I was slightly under the weather so I 'advised' a young fellow from the neighborhood who's been playing with us for a few weeks. Part way through the game, he tired of it so I took over. I faces Tyler's Devil's Brigade platoon plus with some Wehrmacht Grenadier regulars. I had a Pz.IV D and Tyler had a tank destroyer with a ancient 75mm cannon on an M3 halftrack chassis. It proved to be enough.

On the other side of the table, Marty's Sikhs defended against a parachute landing of Robby's Airborne in a scrimage/maneuver/wargame-of-a-wargame. They actually had time for two games since Marty cleaned up the air-dropped Screaming Eagles in quick time in the first game. It was a night battle and the paratroop were "dropped" by dropping 'chits' from a height. If they landed off board, the represented element was gone. If it landed in trees, it was pinned. In the second, Robby had some air support and the Sikhs didn't do so well.

There was a third game with Andy monitoring it, but I don't know what happened there.
At the end of all this, I had to meet with a couple who came to the library for some pre-wedding counseling. While I met with them, my daughter, Katie was introduced to Disposable Heroes! She is an experienced gamer with an Elvish army for Warmaster and some crazy D&D and Traveller characters. She fought Tyler (her fencing master) and seemed to enjoy the game. Once we went home, Tyler came over and she and Robby played him in a War of 1812 game using Iron Ivan's This Very Ground rules.

The Boot Camp idea was a good one and a worthwhile activity. Most of the regulars are more familiar with the rules now. Everybody has their favourite army as well.
A few notes:
Next week - 1812 patrol adventure!
Posted by Grenzer John at 15:27 1 comment:

"So, where were you?" the voice on the telephone asked. Andy called to kid me about my absence from the Hamilton Road Games Group on Saturday. Temperatures of -8C, 15cm of snow, and my condition of feeling lousy kept me away from the club. Still the gaming went on. My son, Robby hosted DJ and Tyler for a Disposable Heroes game in our front room. Americans and Canadians vs. Germans on the big table. Tyler wanted to try out his design for the 1st Special Service Force (the "Devil's Brigade" or the "Black Devils"), the mixed American/Canadian unit that surprised everyone in the Italian Theatre. DJ likes his armoured infantry battalion. Robby tried Germans for a change, but ended up on the short end of the stick. He did have a good time, he told me. ... and DJ bought lunch!
Me, I was asleep in the family room, my body wracked with... yeah, I don't care either. I'm fine today.
On to the photos!

According to Robby, they beat him badly, but everybody enjoyed themselves which is what really counts. DJ and Tyler may have cooperated more than the rules permit, but what of it? Everybody enjoyed the game. I think that troops mounted in vehicle need to have the vehicles remain close by rather than serving as "battle buses" for other un-mounted troops, but I wasn't there to rain on their parade. Here is a good example of how players agreeing on something not so kosher according to the rules makes the game run smooth. If everybody agrees, why not? The rule writers won't come to confiscate the rules; we paid for 'em, they're our's. That how it works.
I think that the next big thing at the club will be a War of 1812 "mission game". Robby and I are working on some new random encounters. We need a change from the bear-and-brigands encounters we've been doing. (I personally would love to introduce aliens and other weird stuff, but I won't. That for another day with the Pulp fiction game.) Next week, probably more WWII.
On another tack, here's a photo of Robby in his WWI gear as a medical orderly attached to the PPCLI (Princess Patricia's Canadian Light Infantry) for the WWI education day last fall. Our reenacting group works with a larger WWI group to put on an education day for a number of local schools. The students come to the site and are taken through a number of stations in which they find out about gas warfare, tunneling, women on the home front, close-order drill, grenade throwing, and other topics. The sites are run by reenactors in period uniforms. {I wish I had the chance to learn history this way... but NO! I had to read books and listen to lectures!} Anyway, here's our boy in full gear. 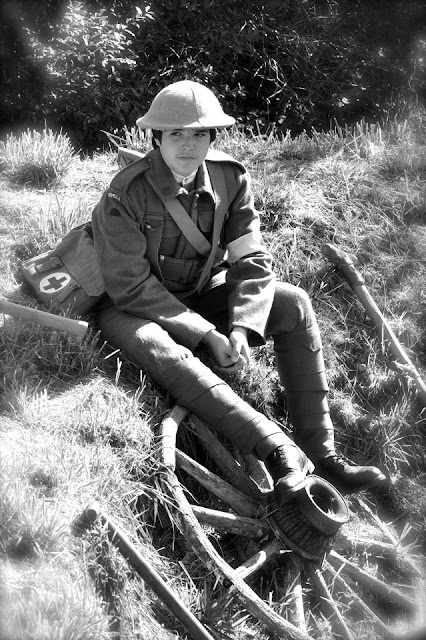 Posted by Grenzer John at 11:40 No comments:

The Boot Camp continues yet again!

"Once more unto the breach, dear friends..." (Henry V, Act 3, Scene 1)
The gaming on Saturday at the Hamilton Road Games Group was interesting. Warhammer 40K at one table and two games of Disposable Heroes at two other tables. Martin and Duane faced down Robby and Tyler, Germans and American, respectively. On the Italian front, the Germans had a mission to hold a bridge while the US had to rescue a recon unit, but neither side knew the other's mission. Martin designed the scenario and it worked well. Andy and I pushed Russians and Waffen SS at the other table. We continued our experiment of finding a way to reflect experience of troops in how they move and  hide on the board.

Here are some photos of the four-man game:

As it was, both sides fulfilled their missions and so, both won! The jeep was shot up and put out of action once it was revealed, but the crew got out and escaped. The US players never intended to cross the bridge and stay. The German players had been told that the river was crossed in force on their left a ways down the creek, but they were to hold this bridge ("Hold until relieved..."), but they didn't know that the US was not going to take and hold the bridge.
On the other table, Andy and I duked it out over a village very much like the one last we played. We were experimenting again. We said that all experienced troops in cover could ignore the first "kill" whenever fired upon, to reflect the better use of cover and terrain by experienced troops. Sad to say, it didn't work well. Half way through the game, both sides having suffered a total of THREE casualties, we dropped the experiment and did a lot of damage to each other... as you will see:
﻿
﻿

For what it's worth, our experimentation showed us that adding something to the rules to reflect experience either my making the trooper harder to hit or cutting out the first casualty of any fire slowed down the game immensely and made the play much more complex. Next time we'll try allowing any unit whose leader's guts exceeds 10 (or is noted in the scenario somehow) to get a -1 to be hit in all circumstances. It may not work but we're still trying... and we'll keep playing!
Posted by Grenzer John at 13:17 4 comments: