This past Saturday, a reduced contingent of the Hamilton Road Gaming Group used Black Powder yet again to play a Seven Years War game. Bear had to be elsewhere. This time Andy fielded his Prussians with the assistance of Martin as his left flank commander. Kevin and I rolled out the Russians. (Three brigades of line musketeers, one of grenadiers with one musketeer regiment, a heavy cavalry brigade of cuirassiers, dragoons, and horse grenadiers, and a light cavalry brigade of hussars and Cossacks. Add to that 5 cannon and one howitzer.) This always makes for an interesting game, although Kevin's dice were exceptionally cold. Mine were moderately warm up until the end, when they turned frosty.


Kevin and I got the initiative and stepped off quickly. We were all pretty far away from each other and, as I should've guessed, the Prussians didn't advance very far, waiting for the Russians to advance into the teeth of their musketry. We did our best to keep our solid line intact, but the Berliners wouldn't come out to play. Kevin tried an end run with his hussars and Cossacks which Martin met with his hussars. Kevin came out the poorer on that account. I tried to bring my cuirassiers around the left flank forest but they stalled out after Andy disorganised the lead regiment with artillery fire. The dragoons/horse grenadiers refused order for a brief time but came forward after a bit to guard the left flank of my one infantry brigade.

Well, things didn't go so well for Kevin and I after that. My cuirassiers finally rounded the forest and took on Andy's kurassiers and dragoons. One of my regiments fell back as did one of Andy's to the flank attack was not a success. The Prussian infantry began to advance slowly, with both the Russians and the Prussians losing a regiment each to artillery and musketry. The Prussian hussars were both shaken which didn't permit them to do much of anything. The Russian hussars and Cossacks had broken and left the table. It was getting on to closing time at the library so we "extrapolated" the ending, the Prussians giving the Russians the "Golden Highway" to retreat to Brest-Litovsk.

I again forgot my resolution to use the oblique order with my SYW army. Looking back with 20-20 hindsight, I should've guessed that Martin and Andy would play the "waiting game" until something cracked. Ah, well.

Posted by Grenzer John at 13:43 No comments:

Originally, this past Saturday at the Hamilton Road Gaming Group was to see our first try of Warlord Games' Hail Caesar rules for ancient battles using a Roman civil war scenario. Sad to say, Ralph was called away at almost the last minute and since he was bringing about half of the figures, we had to scramble to find other things to do. Kevin and Martin played Naval Thunder using ships of WWI vintage. They were trying some sort of game with a movable map that "scrolled" to actually bring some islands further onto the board. This allowed their table to be much larger than it originally/officially was. I wish I could tell you more about it but I was busy myself.

Bear and I moved first and looking back, I realised my mistake (more on that later) and we covered as much of the field as we could. My cavalry were stuck behind the forest and Bear's hussars were covering the other flank. I also had to contend with a low wall lining the road which ran across my advance. This slowed me up a bit. Andy came on in fine linear style and it was impressive. Each of us failed our command rolls a few times - an aggravating and rather important part of the rules. We also insisted on something particular: Black Powder demands that precise orders be given to units, i.e. "von Goofus' brigade will march forward to plug the gap between the woods and von Schnell's brigade." If your command roll is successful, that's exactly what you do, BUT you go up to the gap and no further than that. If you fail, you don't move... unless your units have some special ability (like "superbly drilled") or are in column/limbered. Such formations can perform one action (move, change formation, unlimber) despite the command roll failure. A blunder is a serious failure (should you roll double sixes/"boxcars") because you are required to do something like move to your left/right or fall back or advance 3 moves. That could really mess up your plans.

Nobody blundered yesterday. Both side advance toward the other and began to exchange fire, both musketry and artillery. One of Bear's battalions had enough and fell back. Later one of Andy's battalions was shattered by Prussian musketry and routed. I attempted a charge with one of my kurassier regiments and they suffered the same fate from closing fire. Bear's Totenkopf hussars bravely took on a French heavy horse regiment and they cut at each other for two turns until the lighter horsemen had had enough and routed. I made a wild attempt to reinforce the far left by detatching my two dragoon regiments and moving them behind the Prussian lines hell for leather. They responded well to my commanding general's order, but were too far away to influence anything at the end. Andy's cavalry brigade was attempting to turn the Prussian left but some good hits by our artillery disordered them and they couldn't get traction by the time curfew was called.

Just about every time I play, I learn something. (Well, not always.) This time, I caught on to:
Next week? Andy and I had so much fun, we decided to do it again - Prussians vs. Russians! If Ralph can make it, we'll go with Hail Caesar, but if he's still unable to play (he's a truly busy man), the old adversaries face off in East Prussia.

Posted by Grenzer John at 15:54 No comments:

All-Day SAGA and a change in the prevailing weather 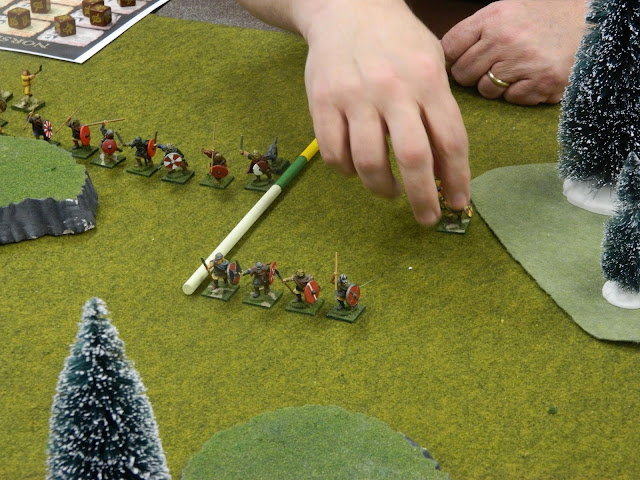 For Saturday, the hive-mind of the Hamilton Road Gaming Group had planned to play some SAGA games. SAGA is a "Dark Ages"* skirmish game from Studio Tomahawk. The sides are rather small and handy and various "factions" are available - like Vikings, Anglo-Danish, Anglo-Saxon, Franks, Pagan Rus, Saracens, and the list goes on. I've been told that there are "bootleg" LOTR lists available if you can find them.
(* I don't believe in the so called "Dark Ages." The term reflects a Romano-centric view of Europe, that is, without the Roman Empire, civilisation did not exist. In the Eastern Roman/Byzantine Empire, in the Muslim world, and in Ireland prior to the Viking incursions, culture, science, thought, and the Classics were alive and well. There were even lively civilisations based in the Roman successor states which are called the Barbarians. The Byzantine return to Italy saw to the end of Lombard culture and the others sort of faded.)

When Beth, Rob, and I arrived at the Crouch Branch Library, we were pleasantly surprised to find tables set up for 4+ games of SAGA and a further table for a game of Napoleon at War. The day looked promising!  (All photos by Beth, Andy, or myself.)


We ended up playing at least two games a piece. The first set of games included Vikings (Rob) vs. Normans (Steven), Skraelings {North American natives} (Ralph) vs Byzantines (Martin) {a true historical match-up if ever there was one!}, Vikings (Andy) vs. Anglo-Saxons (Kevin), and Welsh (Beth) vs. Norse-Gaels (Me). All the games appeared to be hard fought, except mine because Beth slaughtered me. I was trying out a new faction, because my Irish couldn't seem to win if they had a bye.


Since I was paying more attention to my game than any other, all I can say is that Beth beat me handily. As usual, I couldn't throw dice to get what I needed in any situation. The Norse-Gaels have a challenge option as part of their tactics and that could be quite nasty from the looks of it. Could I get it to work? Not a chance. It was a matter of an unfamiliar "battle board", rotten die rolls, and Beth's ability and good die rolling that took me out. I got more than a little disgusted with my situation, and at one point, I stated that I hadn't worn a game since 1982... which was a bit of an exaggeration but not by much! You can see the lay-out of the terrain for the battle in the photo above.

A second round of games came on and Rob played his Vikings against his mother's Welsh and beat her just before he had to leave to go to work. Ralph's Skraelings met Bear's Jomsvikings on the field and that was a tough one as well. Eventually Martin and I played, his Byzantines against my Irish.


After much riding around - which you can do if your outfit has a lot of cavalry - the Byzantine warlord and his house troop charged my warlord and his Fianna. It was messy - my Fianna hearthguard was armed with Danish axes but had very little armour - but my warlord killed Martin's and I won! We counted up victory points for laughs and Martin had one more that me, but since his warlord was killed (the victory condition), it didn't matter, I squeaked out a win! I still can't get over it.
Next week, we will be experimenting with Warlord Games' rules for ancient warfare, Hail Caesar! I am looking forward to this. I am busily rebasing my Gauls but I think the plan is to fight a Roman civil war. (There are enough to choose from.)