Once Upon a Time in Natal

Saturday saw a return of the 54mm British/Zulu gaming, which is always fun even though the conclusion is just about a given. Andy has a collection of about 50 British and 100 Zulu warriors. We ended up playing two games with the usual stipulations for this sort of game - Zulu casualties are 'recycled' 20 at a time; British casualties remains casualties; no moral is taken; Iron Ivan's This Very Ground rules are used with some variations.

Here's the set up for the first games: (Photos by Andy, Beth, and me)
The British began surrounded in a farmstead of two houses and a barn with a fence around it all. The Zulu iMpi began in 5 different directions, determined randomly. Part of the trouble was the fence butted up against a forest in two places, allowing the Zulus to move to the fence while hidden in the woods. They were over those fences soon and into the British lines. (Some of the Zulus carried rifles but never seemed to use them.) It was messy and quick. In the end, the British casualties were recycled into a relief column that didn't reach the compound in time.
﻿﻿
﻿﻿

﻿﻿
﻿﻿ The second game changed things out a bit. The forests were removed, the high grass was cut back, the barn was replaced with a blockhouse, the houses were put touching, and the Zulus all assaulted from one side - sort of a "horns of the buffalo" thing. It was still quick and dirty.

The games were quick and entertaining. Among our rules variations, we made the rifle ranges the entire table - probably a bit unrealistic, but it made the game simpler. Smokeless powder as well and no reloading times as you would have for muskets. I'm sure if we had a Gatling Gun or some sort of artillery, things might go differently.

I'm not sure what's going on next week at the library; I'm tied up anyway. And... reenacting season is coming up. 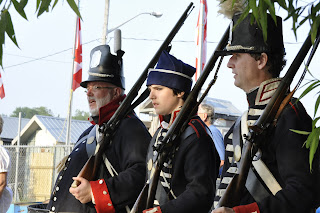 Both Robby and I had the day off, so we did a quick game in the front room. It was a War of 1812 skirmish using Iron Ivan's This Very Ground. Robby set the table, I won the initiative and made him deploy first, but he got choice of side. He had a unit of British Regulars, a unit of rifle-armed Glengarry Light Infantry (an upgrade of sorts since they actually carried smooth-bore muskets) and a warband of Native warriors.
I had a section of US Regulars, a section of US regular Rifles, and a section of State Militia. The game took an interesting twist.
I had the initiative and moved first.

﻿
﻿﻿
﻿
The Native warriors charged the US Rifles, who were ready for them. The Rifles fired and shot down one warrior then the two side met with hatchet and knife. Much to my surprise, the Rifles came out on top! (Robby loves to play the Natives and he does a terriflyingly good job... usually.)
My Militia failed their morale twice and had to fall back, but by that time the Natives and the Regulars had been wiped out. The US Regulars were reduced to an ineffective cadre and the British Rifles decided to exercise the better part of valour.
A brief but good game. I rarely win so this was a suprise and an Easter treat for me. A good way to spend the afternoon of a day off.
Posted by Grenzer John at 14:40 No comments:

Since it's the Easter Holiday...

Not all of my figures are directly related to gaming. Some stand in somewhat more "supportive" roles, which means they do nothing on the table top. Nothing but allow me to paint some different figs. Here are some, related to Easter in a rather flimsy way.

Since I have a day or two off after the Festival, I'm either punchy or whimsical... you decide.

Thanks for looking.
Posted by Grenzer John at 14:03 1 comment:

Why wasn't this around when I was studying history?

I've asked this question any number of times whenever I go out to an "Education Day" as a historical reenactor. I'd have much preferred this to dry lectures, corny filmstrips (yes, not films, but FILMSTRIPS. "Turn the crank when you hear the bell on the soundtrack."), and classmates who saw no value to history.

In any event, this came up because Robby and I participated in a World War I Education event at the Grey Roots Museum and Archive in Owen Sound, ON. Led by our friend, Jeff Brown of the King's Company and of History Matters, we journeyed to that town to present a lecture/display on the German Soldier in the Great War. Jeff gave the talk, Robby was the "living, breathing, not-talking manikin for the uniforms, and I... held his coat. I was muscle and assisted in the uniform changes. About two dozen local folks attended and it went well.
I also took photos... for three reasons. First, for the family; Second, for our reenacting group, the King's Company, and third, to make Robby's history teacher jealous. Robby was out of school for the day to take part in education on the other side of the desk!
My boy showed four impressions:
1) An early war infantryman

﻿
The second impression was an early/middle war medical orderly﻿ - Rob wants a hat like that and really enjoyed the side arm!

﻿﻿﻿﻿﻿ ﻿﻿﻿﻿﻿
﻿ ﻿
﻿﻿ ﻿﻿ Third impression - late war infantryman with the fly-fronted jacket, Stahlhelm, and grenades. The rifle - a Mauser 98G - is not a reproduction. Jeff also brought along a "Commission Rifle" made and used earlier, and a plastic and wood dummy of a Lewis Gun.


Of course, Robby could keep a straight face all the time. With Jeff snarling and mugging off camera, we got this one!

I don't really need to say that I'm proud of my son. I am... tremendously so.
I truly enjoyed working this event with Rob and Jeff, although all I did was help Rob do quick changes in uniform. This is education that's fun to see and offer.
Posted by Grenzer John at 08:26 6 comments: