In Space... no one can hear you gretz.


A real treat at the Hamilton Road Games Group last Saturday. Kevin moderated a session of the spaceship battle game, "Sunder the Stars." It's a relatively simple game, quite playable and easy to learn... a great combination in my opinion. Bear and I squared off for the first game. Bear played a Klingon flotilla of four ships. They all had names but I sound like I'm clearing my throat to pronounce them.
I brought "The Black Fleet" our of suspended animation to use. It was a way to field a fleet on the absolute cheap. All of the hulls are Styrofoam balls from the dollar store, painted and mounted on toothpicks and a slab of foamcore. It makes for a great look.

I fielded a Dreadnought, two cruisers, four destroyers, and a scout ship (which was originally commissioned as a dry wall plug.) I discovered I had mistakenly taken more ships than I pointed for, two extra destroyers. Ever the gentleman, Bear forgave me the oversight after a series of humorous accusations. I ended up beating the Klingon flotilla but not without some losses.
There are four basic weapons systems in the game - batteries, missile racks, drones, and fusion weapons. Distance (we used a hex based table), defense values, point defense, and number of weapons on the attacking ship make the difference. Missiles can be shot down by point defense and point defense for a few ships close together can be combined. Fusion weapons can be countered by point defense, but if they hit, they do continued damage for as many more turns as you have levels of fusion weapons. Drones are precision launchers that can be countered by point defense, but only of the ship attacked. No ramming allowed; I requested it and was told "Uh-uh."
In the end, I won the battle. We should've made up some backstory permitting me to take a system and all it's resources, but we were too busy fightin' for that stuff.

The second round saw Derek and I duking it out with the Black Fleet of the Styrofoamians facing the United Federation of Planets - 6 ships against 7 of mine. This time I was more careful with the point values so we were even.

It was not a game that was at all one-sided. Derek can be a tough contender. He used his fusion weapons to great effect, burning out a destroyer over three turns. My fusion weapons did nothing, always being stopped by the Star Fleet point defense. Combining point defense values is a great reason to cluster your ships. I didn't do that and I made it out by the skin of my teeth. I lost 3 of 4 destroyers and the scout ship (which I expected to lose.) Both cruisers were damaged, but the dreadnought finished off the last Star Fleet ships once it got up to the where the battle was. Yes, I won the second game as well - an all-time record for me.

Although the rule system might not be as detailed as some might like, If you enjoy sci-fi ship gaming, I'd recommend you look into Sunder the Stars.
Why did I choose to use Styrofoam balls for my ships? Cost and availability were certainly factors as were the lightness of the finished product. But there was another consideration. 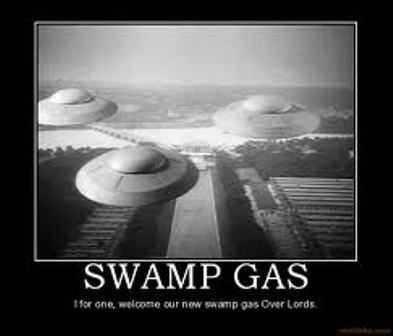 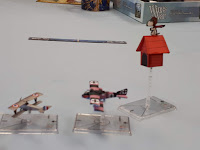 Usually the Hamilton Road Games Group holds a Christmas season party later in the month, lest the Advent Avenger get word of it. This year, one of our number, Martin had to return to his family home early because of a family wedding. So we held the gathering early. The games were traditional (for the group) and the seasonal treats were well done - hot chocolate, cookies of all types, and some slices of panatone, a delicious Italian Christmas cake.
The morning was given to snacking, kibitzing, and finally playing "Wing of Glory", our WWI airplane game. Three of us took German planes and three took Allied planes. The Sopwith Camel was replaced by Snoopy and his dog house, a requirement of tradition at the games group. The game is a product of Italian gamers and we find it fun to play and easy to learn. We played this until we took a lunch break. 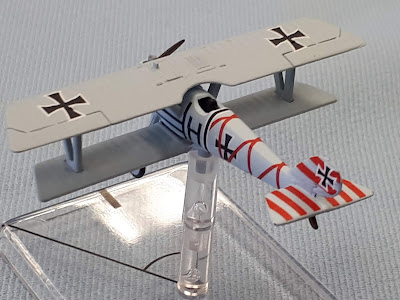 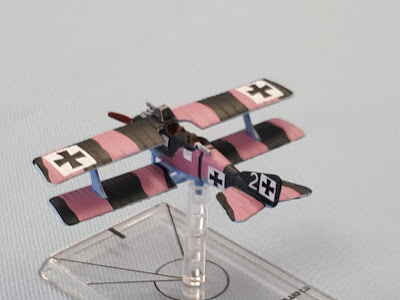 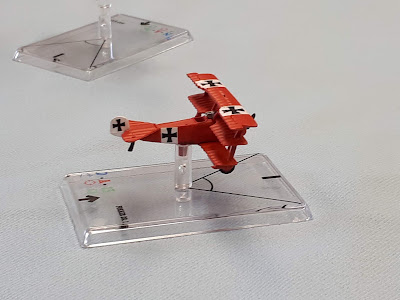 The afternoon was filled with the Pulp-ish Rescue Santa game. I used a variation on Nordic Weasel's 5-Core games, taking bits and pieces from their WWII and 20th Century skirmish games, the Pulp adventure rules, and the fantasy rules. All use the same very workable mechanics and made the game go fast and fun.

Here's the teams, each with a leader and 4 troops, plus a few fun figures:


*The Banana Republican Guard were the brainchild of Martin's fevered imagination and his 3D printer. In this case, a picture is worth 10,000 words.

Santa and his elves were being held hostage in the workshop by the Krampus and the Grintch where were being assisted by... MARTIANS! Martian soldiers, Martian tripods, and allied Lizardmen were holding the North Pole. They threatened to hang Santa, those lousy, nasty grumps! The teams listed above went north to free St. Nick. (Three other teams were available but were not chosen - the RCMP, the US Rocket Corps, and a team of gorilla/guerrilla fighters from the Planet of the Apes.) My daughter, Katie helped me dream up the scenario and outline the teams and she brought more than a few new ideas to plague the other players.

Martin's team of fruit-fly-attractors fought against the one small tripod and later in hand-to-hand with the lizardmen, although they encountered both the Candy Cane Forest and the jugs of spiked egg-nog. They then were both drunk and sugared-up, or "marinated" as Martin put it. They suffered the most casualties, but took down a tripod and used their assault rifles well against the lizards. Bear's Cap and rangers found Santa's sleigh which took off in a random direction, but they were able to jump off before it crashed and hurt them. They used a fallen tripod for cover as they advanced. The rangers and the Jungle Patrol took down another tripod. Nia's Shadow/police group faced the Martian Soldiers and took them out, using their riot guns and the Shadow's Eerie Laugh. ("The weed of crime bears bitter fruit!") They also encountered a gaggle of coffee-ed up elves, who tried to give them the jitters, but ended up following the City's Finest. Derek with the Phantom and the Jungle Patrol were frozen once but pushed on, even though the Mis-fit Toys tried to keep them where they were. Matt's Cowpokes met three Wise Guys - Caspar, Melchior, and Vinnie the Nose - who tried to make them "an offer they couldn't refuse." After some negotiations, they gave the Marshal a cryptic note.

Matt took the note and approached another encounter marker where they were faced with Tim the Enchanter who asked them "Questions three!"
He couldn't answer them all correctly the first time and he had to fall back. His sharpshooter with a sniper rifle did do great damage to the medium sized tripod. Matt soon realized that the scrap of paper given to him by the "Three Wise Guys" held the answers!
Derek's Jungle Patrol moved in on the gallows. Matt's cowpokes took down the Grinch. Marley's Ghost frightened the Patrol, but Devil, the Phantom's Dog, was uneffected! He rescued Santa and they freed the elves and Dominic the Italian Christmas Donkey in the workshop. We all ended up with bellies full of panatone and chocolate-chip cookies and were awarded points for what was done.

Well, we didn't really keep score, but it was fun.


There will probably be other blog posting on the way, but take this as our Holiday Greetings
from the Hamilton Road Games Group for however you celebrate the end of the year holidays!
Peace be yours!