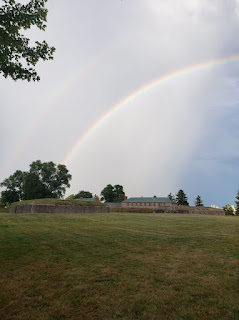 After two years of delay made unfortunately necessary because of Covid-19, the Siege of Fort Erie was done again this August. It was a wonderful event, although it was blisteringly hot and horribly humid. The photo above was the rainbow over Buffalo, NY after a rainstorm... and not a drop hit us across the river in Ontario.

(All the photos are to be credited to Laughing Devil Photography, Larry Barnard, Ralph Golin, Mark Psulka, my wife Beth, and a few others whose names I could not find.)

Sad to say, I was not feeling well due to the heat for most of the weekend. I did take part in Saturday's parade and the turn-over of the fort to the American army once the garrison marched out. I had the honour of being adjutant for the US side, which was interesting.


The afternoon battle, meant to display Chippewa and Lundy's Lane, was shortened because of the intense heat. Everyone was being very careful!

The night battle, the reenactment of the night attack on the fort, is always a load of fun and quite a blast - literally! Beth armed herself with my carbine, a hunting shirt, and undress cap as well as the belly box she bought for me that day and took her place on the wall. Alex's musket would no longer fire at one point, so she handed over the carbine... which he used and now wants me to leave to him in my will. Get in line, Bud!


This is a short blog since my part in the event was curtailed. I hope to do better next time... both on the field and in the blog.
Posted by Grenzer John at 12:16

Email ThisBlogThis!Share to TwitterShare to FacebookShare to Pinterest
Labels: 17th US Infantry, Reenacting, Seige of Fort Erie, War of 1812