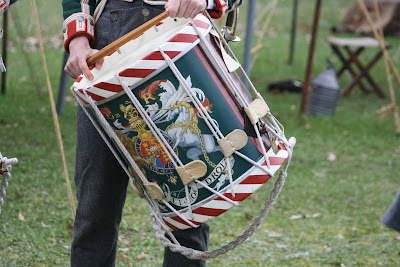 Although the reenactment at Longwoods Conservation Area was over a week ago, I'm just now getting around to blogging about it. Cheers (Three!) to the Royal Scots Light Company for getting this going again!

Beth and I set up camp on late Friday afternoon, but did not stay the night. We live about a half hour's drive away and went home for our night's rest. When we came back Saturday morning, we received reports that it was really cold there. It also rained some on Sunday morning. What can I say? By the end of the day, the canvas of the tents and fly were almost dry... almost.

The day's schedules for Saturday and Sunday were almost identical. (I had Sunday off and my church council insists that I take my time off.) The "battle" took place in mid-afternoon each day. According to long tradition, the Crown wins on Saturday and the Republic wins on Sunday. Often the actual battle of Longwoods is reenacted on Sunday, but not this year. Sunday's numbers were down and a barricade could not be set up for a battle of Longwoods reenactment. We still burned powder and had fun.

Lot's more when on, but this is just a selection of the photos available to me. More reenactment to come!
Posted by Grenzer John at 09:28

Email ThisBlogThis!Share to TwitterShare to FacebookShare to Pinterest
Labels: 17th US Infantry, Battle of Longwoods, Royal Scots, War of 1812