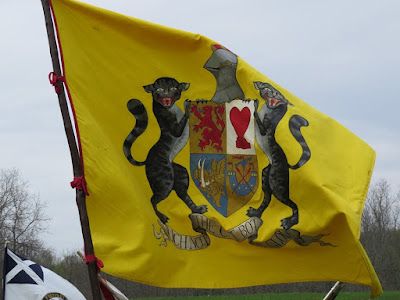 The so-called "Culloden event" took place a few weeks ago at the Backus Page House Museum grounds in Wallacetown, ON. These grounds really work well for the event and those who plan it decided a few years ago to make this the permanent place for the event. Prior to that it had moved around in Canada and the USA.

A few changes were made in the usual scheduling and structure. The gentleman who often took command of the Georgian/Hanoverian forces had withdrawn because of a number of personal factors that don't bear repeating here, so the ultimate command of the Government forces fell to ...


...me.
I actually had a load of fun. The Jacobites usually had a man portraying "Bonnie Prince Charlie", and although he was present, he decided to portray someone else. As always, he did a fine job. He and I and a few others mapped out the battle and included the stealing of a Jacobite cannon for use by the Government forces.
Saturday, The Government loses. For the battle reenactment, we set up an artillery strong point on the top of a small ridge on the property... well within sight of the spectators! (It is a sort of a show, after all.) Pickets were set out and whistle orders were arranged. ("One blast - go forward. Two blasts - come back to the commander. Three blasts - run like mad and save yourself!") The Jacobite heavily out-numbered the Government, but for once the entire Government force of infantry were in red coats or jackets, some dresses as various militia units, some as regulars.
We set up as two lines of muskets, a mighty four men each with two cannon in the middle. The Jacobites moved in from two directions, working their way slowly up the hill until command was given - "Broadswords!" At that point, the surviving Government troops either surrenders or took to their heels. Soon after that, we paraded and saluted each other and the crowd.

I got there late on Sunday, since I had to lead the worship service at the church I serve. But I got there in time for a light lunch and the afternoon battle. Here, representing the retreat of the Jacobites from Culloden, the Government wins. The real pursuit was horribly gruesome, so we toned it down a bit and kept it to moderate bloodshed. We started on the hill again, sweeping down to chase and harass the retreating clans. One gun - whose crew included my wife - stayed on the hill while a smaller gun, captained by Bill followed the infantry down the hill. We kept advancing on the rear guard, whose commander, Tom, was uniformed as a French officer and who gave all the command in French. At one point, we moved up while he we passing behind his unit and he was surprised at how close we had come! The Government forces knelt, and the clan regiment fired over our heads, then we stood up ("Spring up!" was the command; "Are you kidding?" was the grumble from some of the older reenactors.) Before the clans moved out of the sight of the spectators, I ordered a charge and we chased off the clans, dispatching some stragglers. ("Charge your firelocks! At the double... Advance!") Were these the proper commands? I don't know... but we had fun. One fellow we called Wee Tom (who was in uniform with his fiance) ran up to a Jacobite who had fallen and I heard him say "Scream! I'm pretending to stab you!" The shriek of terror was worthwhile.

There was one more ceremony to be held in the government camp. On Saturday, Caitlin, who is well attached to Tyler, served on the gun crew and, according to artillery tradition, had to "kiss the sponge" after her first time out. No actually kissing is involved; the new gun crewman has the wet sponge rammer from the cannon smeared across both cheeks. On Sunday, my wife, Beth, served on a gun crew and the gun commander permitted me to "do the honours."

This event usually takes place on the Victoria Day long weekend here in Ontario. If this period interests you, come out and see us. If you want to join as a reenactor for either side, contact me and I'll do my best to hook you up. In any event, I'd enjoy seeing you there!