Andy, Rob, and I got together this afternoon to try a Seven Years War game using the Black Powder rules. With the kind permission of Cecil, the proprietor, we gathered at The Games Chamber in London and played on their wargames table. (By the way, if you're near London, ON, you really should stop by The Games Chamber; it's a great place with fine people - well worth the trip.)

We decided to play a historical match-up (HORRORS!) of Prussians vs. Russians. 3 brigades of infantry each with a battery, a reserve brigade usually made up of grenadiers, and a cavalry brigade. Each brigade had a brigadier and there was a bigger general in over-all command. Andy's Prussian generals were pretty good all around. The Russians... less so. I had good generals (8 on a scale of 10) as over-all commander and in command of one of the infantry brigades, mediocre generals in charge of the cavalry and an infantry brigade, and what the rules refer to as an "idiot general" leading the last infantry brigade and the reserve. The Russian reserve was 2 grenadier battalions, a Russian line battalion, and an Austrian line battalion. The cavalry was a regiment each of dragoons and horse grenadiers at 16 each, the Horse Guard regiment of 16, and a regiment of Cossacks, also at 16. Each infantry brigade had four infantry regiments, 24 figures strong - which makes them average sized for Black Powder. 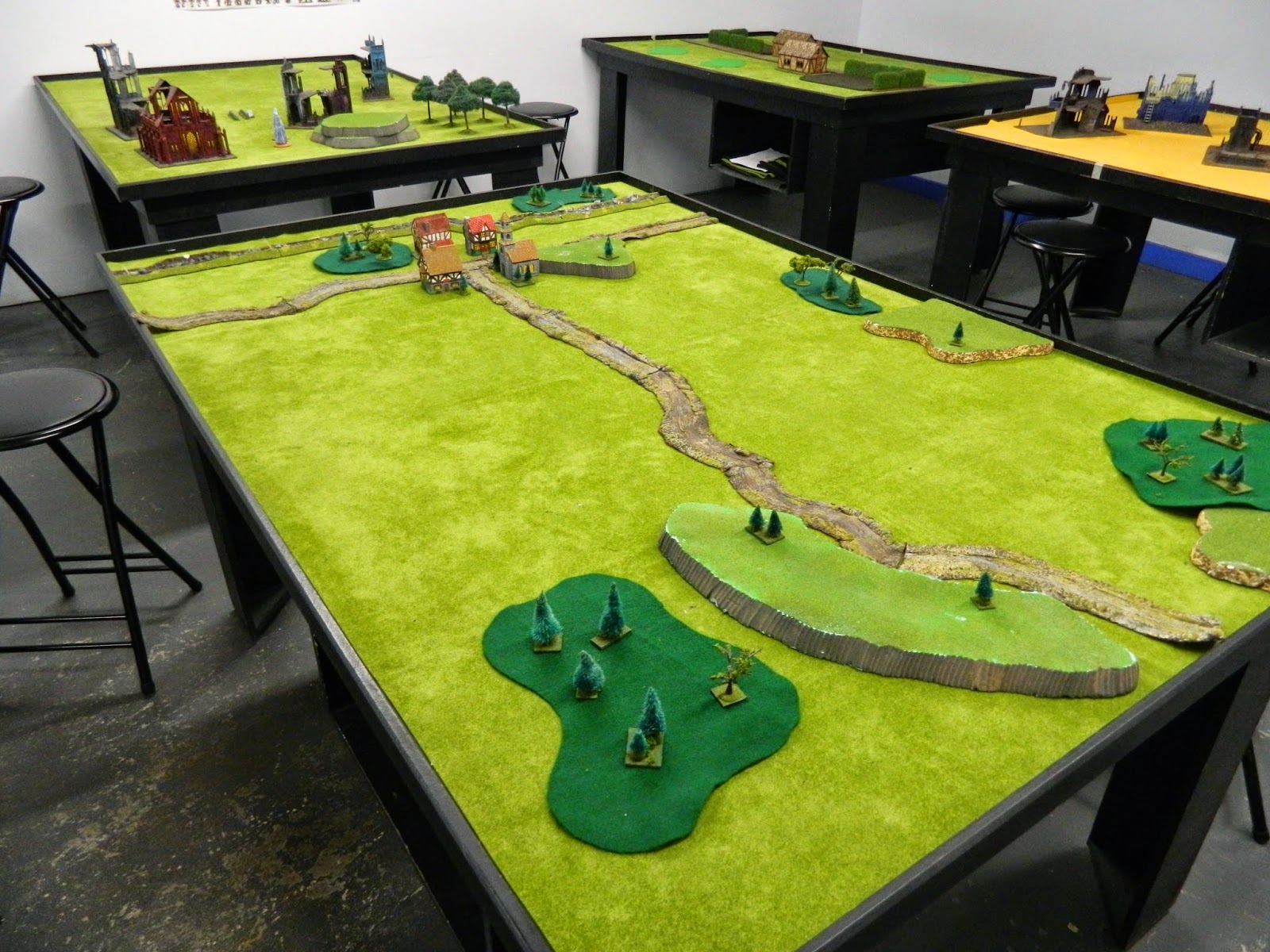 Since Andy "out-generaled us" with better staff work, he was able to move quicker than our line. The cavalry ended up meeting in the middle. One of his dragoon regiments failed to charge while the other three charged home. The Horse Guards lost the melee and had to fall back, the horse grenadiers and their opponents fought to a draw and both fell back. The Cossacks... well, the Cossacks lost their melee badly, rolled a break test and left the field. Poof! No Cossacks!

So the Cossacks ran away, and the Horse Guards eventually fell back again due to a blundered roll in an attempt to rally them (and remove casualties.) (Casualties in Black Powder are more of an indicator of morale than actual losses in the unit.) The infantry kept coming up with all but the reserves on the board. We agreed that the reserves could not be deployed until one brigade broke and ran. Cannon began to fire with some small effect due to long range. Then the dreaded curfew hit. My son had fencing practise this evening and we had to leave.
For the Seven Years War, Black Powder seems to work fine. It is quite playable and has a great feel for the period. Rules where casualties are not removed are not everyone's cup of tea, but I think it works well for this set of rules.
It was really good to play SYW gaming again. In retrospect, I think I should've put the Cossacks in the front line rather than behind the horse grenadiers. One thing I can't get around is the poor quality of the Russian generals. This is historical for this period; many of the Russian officer corps were known for their laziness and their lack of thought, independent or other-wise. We'll no matter what, I'm looking forward to our next outing with Der Alte Fritz, von Brown, and the boys. We'll also need more time.

I'm getting to like Black Powder more and more. I'm hoping to use it for ACW in particular. I want to thank Cecil and Tim at The Games Chamber for allowing us to use their table space this afternoon. And we were out in time for this evening's game league play!
Posted by Grenzer John at 19:10